A proposal for the construction of a Marina in Bartica, was on the agenda when Minister of Business Dominic Gaskin travelled to the Region seven community and met with stakeholders to discuss the project. 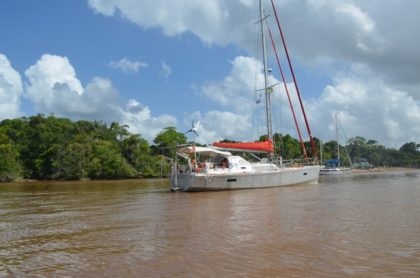 The Marina will add to the growing number of attractions that are slowly making the new township one of Guyana’s premier tourism hotspots.

The initial stage of the project will see the construction of a dinghy dock and the laying of moorings to facilitate pleasure yachts. Once completed the infrastructure will ensure the provision of safe, secure anchorage facilities for visiting yachts and reduce the risk of damage.

After examining the proposed site, Minister Gaskin endorsed the project and complimented the various stakeholders for their enthusiastic support. The Mayor of Bartica, Gifford Marshall and Chairman of Region Seven, Gordon Bradford, who were also on site, expressed optimism that the project will materialise in the very near future. 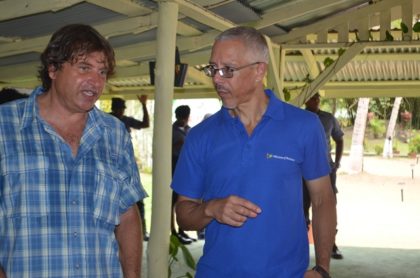 Minister of Business, Dominic Gaskin and David Matelicani, one of the organisers of the Nereid’s Yacht Rally.

Two of the driving forces behind the project, Christopher Kit Nascimento, and yacht aficionado David Matelicani, were also present.  The fifth season of the Nereid’s Yacht Rally is currently in Guyana, with seven yachts docked at the Hurakabra River Resort in the Essequibo River. During a luncheon and reception for the yachters, on September 14, calls were made by organisers of the rally, for the construction of a Marina at a prime location.

Guyana is seen as an ideal hurricane-free tourism destination for yachters, and with the construction of the Marina, the annual rally will see a significant increase in yachts participating.

The Rally will depart Guyana on Friday 22nd to its final destination, via Suriname, at Saint Laurent on the Maroni River in French Guiana for an elaborate welcome by the Mayor of the town, complete with Trinidad & Tobago steel band.  Countries represented at this year’s rally are from Sweden, Australia, the United States of America, France, Italy, and England.