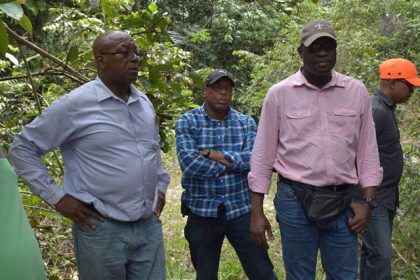 Minister Patterson explained that the team was in the region to get a firsthand look at the two main crossings which link both Mahdia and Bartica.

“We visited the furthest point in Region Seven, which is Cassandra Crossing. The works in that area are progressing satisfactorily and are expected to be completed by mid-2018.

We have a contract from Mahdia to the Denham Bridge and one for works from Miles 78 on the Bartica-Potaro trail to Mile 96 (Cassandra Crossing),” Minister Patterson told the Department of Public Information (DPI).

When completed, by the end of 2019, the project will create a direct link from Bartica to Mahdia after more than 30 years. It will serve as an impetus to the fulfilment of the government’s vision to link the coast and the hinterland.

It was highlighted that the Ministry of Finance officials were invited along so they could better appreciate how the resources for project such as these are utilised.

“At the beginning of the year, I normally go to every region to assess and inspect as many of the major projects as possible. Also, to ensure that the contractors are not executing poor works and this helps us to plan for our 2018/2019 budget. This time I walked with members of the Ministry of Finance because I found that it is crucial that they be able to appreciate why we put in certain measures.  Sometimes it is difficult to explain to them at budget time the need for certain resources and what we are doing with it, especially for the hinterland works,” Minister Patterson underlined. 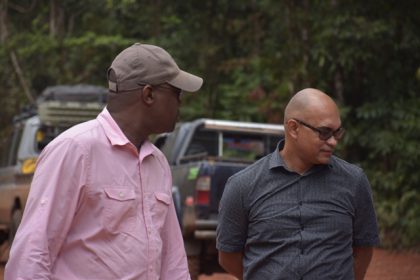 Finance Secretary, Dr. Hector Butts told DPI that based on observations sound arguments will be put forward to the Finance Ministry supporting the relevance of the requests made by the Public Infrastructure Ministry.

“Definitely, I understand the constraints…. this (visit) permits the two officers of the Ministry of Finance to understand the nature of the roads, alignments, ruggedness of it and to be able to give better incites to our Ministry. We can perhaps add some support to the budget officers so that they can make relevant allocations towards the development of these projects,” Dr. Butts stated.

The works commenced in 2017 and have been progressing amidst challenges. Hinterland Engineer, Jeffrey Walcott explained that the contractors are working towards a 2019 deadline, however, the biggest challenges remain the weather and sourcing of raw materials.

“We have been getting support from our contractors and have improved supervision in the regions but it’s a process that we’re slowly overcoming,” Walcott related. 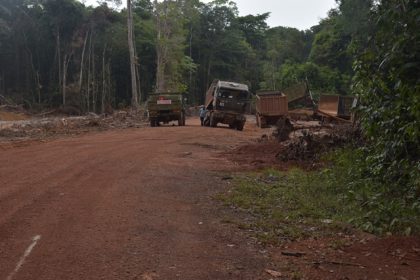 Part of the rehabilitated road at Bartica/Potaro trail.

Walcott said during the 1970s there was a link from Bartica to Mahdia and “if they could have done it then with limited technologies and resources, we can do it much better and keep it open.”

Bridging the gap in hinterland regions remains one of the government’s main priorities. In this regard Budget 2018 provides $1.5B for road rehabilitation and construction of roads in Regions One, Seven, Eight, Nine and ten as well.