The ceremonial opening of the October 2017, Berbice High Court’s Criminal Session was held on Tuesday, October 31, with the usual pomp and ceremony, in front of the Berbice High Court building on Esplanade Road New Amsterdam. 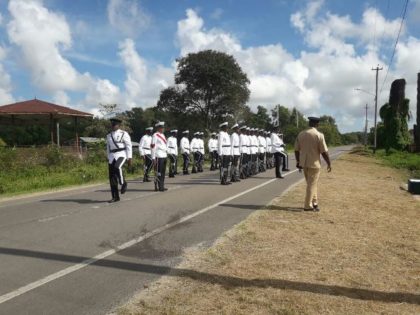 Ceremonial opening of the October 2017, Criminal session of the Berbice High Court in New Amsterdam.

The parade which included a march past was commanded by Assistant Superintendent Antonio Federicks with Inspector Michael Newland as the Parade Inspector. Sergeants Randy Hamilton and Dexter Brandt led the 28-man strong contingent in an impressive display accompanied by the Guyana Police Force’s Drum Corps.

The police contingent marched off from Police Headquarters at Coburg and Strand Streets, before proceeding along Strand New Amsterdam to the front of the High Court.

The salute and inspection were taken by Justice Jo Ann Barlow, who is presiding in the October Criminal Sessions. She was accompanied by Justice Navendra Singh who is presiding over the Civil Court in Berbice. They were escorted by Divisional Commander of Police B Division Assistant Commissioner Lyndon Alves, officiating in his first parade in charge of the division. He was accompanied by Assistant Superintendent Elton Davidson, Officer in charge of the Guyana Prison Service in Berbice Paul James and newly elected Mayor of New Amsterdam Winifred Haywood in the official party.

When the session was called to order, Justice Barlow addressed the jurors present. She outlined their roles and responsibilities, the implications and consequences of not reporting for jury service and the importance of their roles in the dispensation of justice.