The donation was made possible by members of the Sister’s (Village) Police Community Network (SPCN). 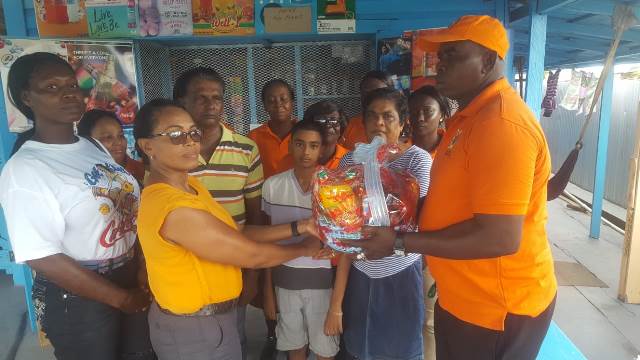 Members of the Sister’s Police Community Network handing over hamper to Mahesh Seetaram and his Grandparents.

At the simple handing over ceremony, Jenicia Carmichael, Community Relation Officer (CRO) of the SPCN, said that the organization is an arm of the Berbice Division, that reaches out to members of the society who are deemed less fortunate or have experienced a tragic past.

“We care for members of society and we try to help in the advancement of our youths,” Carmichael said.

Inspector Margarett Grosvenor noted that the police have a mandate to carry out and ‘B’ Division stands committed to assisting residents within its jurisdiction. She encouraged the lad to stay focus and work towards achieving his goals.

Mahesh’s mother and sister were murdered earlier this year by the hands of his father who, after committing the crime, was later found hanging dead under an abandoned house in the Village.

Mahesh welcomed the donation and expressed gratitude to all those who contributed items for the hamper. He thanked the members of the Sister’s (Village) Police Community Network (SPCN) for sharing words of motivation.

Following the gruesome death of his parents and his elder sister on June 6, 2018, Mahesh is now in full custody of his grandparent. According to the teenager’s grandparents, although Mahesh, at times, will feel lonely and recall the ordeal in June, he remains disciplined and functions effectively at school.