— work for a united Guyana

A call was made by the Minister of Finance, the Honourable Winston Jordan for ministries and agencies’ heads of budget departments to set the example, in terms of leadership.

Addressing stakeholders during the launch of the 2020 Budget sensitisation and training session at the Arthur Chung Conference Centre (ACCC), Liliendall, the internationally trained economist explained that the move by some opposition politicians to oppose the ongoing preparations of the 2020 Budget and whip up hysteria and confusion with the dissemination of “fake news” is “scare tactics” he added. 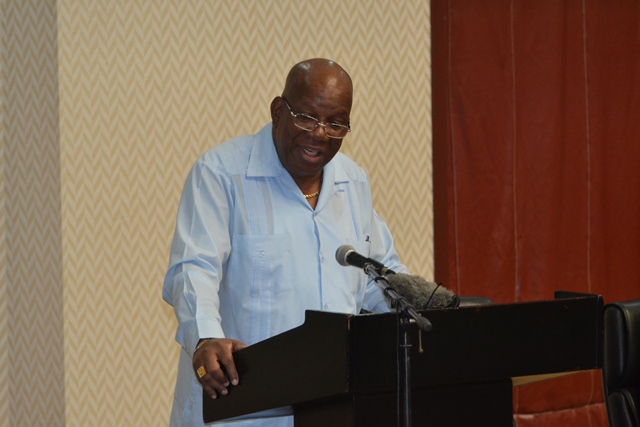 Minister of Finance, Hon. Winston Jordan addressing stakeholders at the launch of the 2020 Budget sensitisation and training session at the Arthur Chung Conference Centre.

He explained a budget cycle has a life of its own.

“There is a preparation stage within budget agencies, consideration by the Finance Ministry, proposals for Cabinet, proposals for Parliament, the budget speech, debates and consideration of the estimates, implementation after passage, monitoring and evaluation, oversight and audit and then the cycle repeats itself.”

The Finance Minister reminded when a government enters office it can either discard or modify the budget it meets.

The Finance Minister noted that the recent kudos given by international agencies including Caribbean Development Bank (CDB), the International Monetary Fund (IMF) and the rating of the United States based NASDAQ, which described Guyana as the world’s fastest-growing economy, was a reason to celebrate and build on.

Rapid economic growth, Minister Jordan added, will be seen when the government continues its stewardship of the economy.

“The trend is there, and we have several people internationally, who are independent, who have said it. At the end of the day, we should come together united for a Guyana that all of us should be proud of.”