After 10 incredible performances, the score sheets saw Berbician, Bunty Singh gaining the lead to once more ascend to the throne of Chutney Monarch.

The final of the 2020 Republic Jubilee Chutney Monarch competition was hosted in front of an energetic crowd at the Better Hope Community Centre Ground on Saturday last.

As the first contestant to take the stage, Bunty’s performance sizzled with creativity and brilliance. The charming delivery of his hit song, “She want me to be she Raja,” managed to set the bar quite high for his fellow contestants. 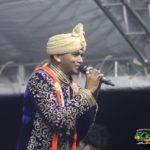 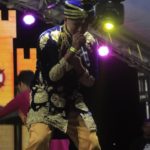 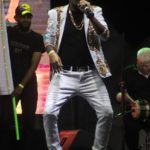 None of them were able to raise that proverbial bar, and so, the former two-time Chutney King was able to reign for a third time, copping the first prize of $1.5M.

Last year, Bunty was dethroned by Steven Ramphal, and placed second in 2019 Chutney Monarch Competition. This year, it was Steven who came in second place, with Bunty copping the coveted title as Monarch.

At the time of competition, Steven defied his doctor’s orders and took to the stage with an injured voice. Despite his weakened condition, Steven dished out a gripping performance that continued his call for unity and love among all Guyanese. By end of that performance however, the singer’s body had worsened along with his voice, and he had to have been lifted off the stage.

Meanwhile, newcomer, Tony Cuttz placed third with a thrilling performance of his song, ‘Neighbour Roti’. The young Barber put on quite the show with his ‘Michael Jackson-like’ dance moves, cut tastefully with some ‘waist-pelting’ and  “screw-bulbing”

The newcomer said he was inspired by persons like Bunty Singh to be part of the competition and that placing third has motivated him to work harder towards the title.

Vicadi Singh, with his song, the “Mousie and she tassa,” came in fourth position. The other contestants include former monarchs, Vanita Willie, Young Bill Rogers and Pooran Seeraj, along with Chris Ramphal, Arjit Singh and AW Lyrical.