Formerly Plantation Orange Nassau, Buxton, is one of the most established African communities on the East Coast of Demerara, located approximately nine miles from the capital city, Georgetown. The community got its name from Sir Thomas Buxton, who fought for the abolition of slavery.

Buxton was bought for $50,000 by ex-slaves in 1840. Its sister village Friendship, formerly Plantation Friendship was purchased in 1841 for $80,000 and together these two villages were amalgamated, forming Buxton-Friendship, whose inhabitants call it just Buxton.  This move represented victory for Buxton’s post -emancipation. During that time, one of the first things the slaves did was to make lands available for the construction of schools and churches, for housing and farming, drainage and other infrastructure, Community Leader, Fitzroy Young told the Government Information Agency (GINA).

Dr. David Hinds, an Associate Professor and a Buxtonian and Village leader

Young explained that the purchasers sought to provide the necessary infrastructure to ensure that the people educated themselves, and they built a church in order to thank God for their freedom.

The ex-slaves also provided large expanses of lands for farming cash crops. Dr. David Hinds, an Associate Professor and a Buxtonian and Village leader noted that after a period of struggle, the villagers managed to create their own government by establishing a village council to manage the community’s affairs.

“They created an economy because once they distributed the house lots at the front of the village, the distributed plots of land at the back of the village, which they call the Backdam and those plots because productive plots where they would plant cash crop and sell on the open market. They also got into cane farming, where they planted canes and sold to the estate,” Dr. Hinds explained.

Even after the village gained its freedom, the struggle continued since the slaves who worked on the plantation removed them from that system and the colonial masters now had to pay for labourers. 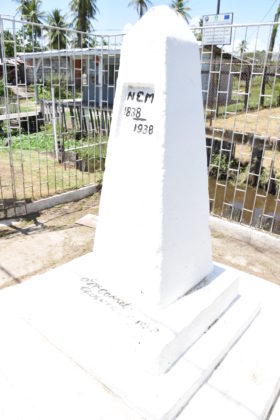 In 1856, the British Guiana Legislature gave the government the right to enact improvement taxes on the properties of the villagers; this led to a standoff between the government and the purchasers of Buxton.

Further, in another effort to settle this dispute, some villagers led by the women decided to block the train carrying the Governor, and forced him to listen to their grievances. With his train surrounded by angry villagers, the Governor promised that Buxtonians would be exempted from those taxes.

Dr. Hinds  noted that even against all those odds, the villagers still managed to build an economy, in fact small businesses became part of the character of the village, several cake shops, grocery stores, even bakeries, coconut factories and a mattress factory were established.

Community Leader, Linden France explained that the Africans, especially those in Buxton have contributed significantly to business development in Guyana, which includes going into the gold fields to find jobs. “Why hasn’t there been a transition of those businesses?…We had all these baker shops, some say we had 11 but I can recall seven, but we had all these baker shops but we don’t own a major bakery selling bread throughout the country and exporting other things we produce, and that’s a question we need to answer as we ponder the future of Buxton-Friendship,” France explained.

He noted that the famous folk song ‘Itaname’ originated from Buxton when seven brothers drowned while paddling in a boat passing the Mora Falls trying to get into the gold fields.

In 1938, a monument was erected on the 100th anniversary of the abolition of slavery, to separate the farm lands from the housing areas. During that same period the railway embankment was established to facilitate the selling of goods and produce.

Today, this community is known as one of the most traditional African settlements on the East Cost of Demerara, with a population of 8000 peoples. On any given afternoon the community is mostly quiet. Men and women on bicycles or on foot are returning home from work and guiding their livestock from the open pastures on which they have spent the day grazing.

This community sits on very fertile land which is surrounded by an irrigation system, including the well-known company Canal. Local farmers produce a variety of vegetables and fruits including Buxton Spice mango. This mango is unique to Buxton, being fleshy and sweet like others, but having a unique spicy taste. 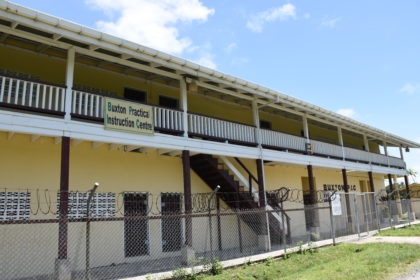 Buxton is characterised by its churches, two primary and nursery schools, a health centre, a secondary school, a Practical Instruction Centre, and a water distribution system among other amenities. This community also has an established bakery and a service station which is being transformed into a mini mall. There is also the famous Tipperary Hall, which is used for community activities.

But while these infrastructure are in place, the education system within the community had deteriorated over the last two decades, Community Leader and Educator Deon Abrams said.

At one time, the community was considered to be highly affected by external criminal influences, which caused activities to cease by 4:00pm in the afternoon under state imposed curfew.

The community also moved from two high schools to zero, from four primary schools to two. All of these negatively impacted the collapse in the education system within the community.

The Village leaders believe that the establishment of a Village policy and literacy programme by the Government can improve the many challenges faced by the community today.

The Buxton community has significantly contributed to the preservation of the African culture in Guyana. Each year, the community organises a week of activities to celebrate Emancipation Day on August 01.

On the eve of the emancipation anniversary, there is a cultural presentation in the community, where the residents participate in drumming and singing of folk songs.

Residents engaging in farming at the Buxton Farmlands

On August 1, there is a feeding programme for the elderly where the young people will take a variety of traditional foods including conkee, cook-up, metemgee and the drink, mauby to their homes. The Buxton First of August Movement has been playing a major role in these activities, Community Leader Herod noted.

As part of their cultural practices the community continues to have their queh-queh on the eve of weddings, and to teach the young people folk songs. Buxton also has a very vibrant steel band group known as the Buxton Pride Steel Orchestra. This group has won several national steel band competitions and usually participates in national events. 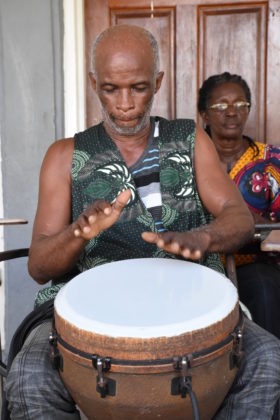 Buxtonian Neptune on the drums

While some of the African culture is being lost, the Buxton-Friendship community continues to maintain their tradition and also teach the youths about the rich African cultural tapestry.