Brigadier General Phillips extended a hearty welcome to Captain Brisson and acknowledge the long history of relations between the Guyana Defence Force and the Canadian Armed Forces. He stated that he looks forward to continued co-operation between the two militaries and the strengthening of existing relations.

The discussion between the Officers is also expected to help in refashioning the way forward as it relates to the re-opening of mutual areas of interest.

Captain Brisson pointed out that his country considers the Caribbean Basin to be important. He noted too that with the recent change in Government in Canada, there has since been a review of the Defence Policy. As such, his visit will help to foster a greater understanding between the two countries as well as the commonality in training.

Brigadier Phillips stated that he recognised the importance of having the Canadian perspective as the Guyana Defence Force continues on its developmental path.

He extended an open invitation for the Canadian Armed Forces to train in Guyana.

Guyana has benefited from diplomatic and military cooperation with Canada over several decades. 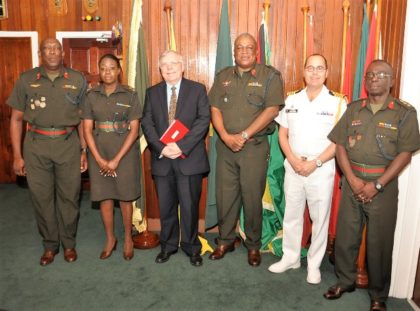