Caribbean to adopt “think tank mechanism” to help  better policies, to increase progress in the economic, social and environmental fronts utilising the Human Development Report 2016 according to Minister of Finance Winston Jordan. The Minister was addressing the launch of the United Nations Development Programme’s (UNDP) Human Development Report (HDR) 2016 for the Caribbean, at The University of Guyana, Turkeyen Campus today.

During his feature address Minister noted that ‘this current report is the first of its kind with a regional perspective’ where governments in the Caribbean are being summoned to work together to achieve the 2030 agenda. “We must take into account the multidimensional challenges we face”, to have proper policies to address challenges. 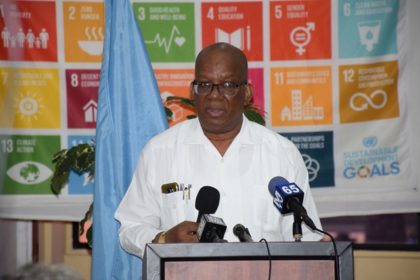 Under the Millennium Development Goals (MDGs): “the world’s time-bound and quantified targets for addressing extreme poverty in its many dimensions”, the Minister noted that the findings are to be discussed and necessary adjustments are to be made to capitalise on social and economic development.

Key facts on Guyana from the report revealed that Guyana has showed strong economic performance over the last ten years. Average growth in GDP from 2004-2013 was 3.86%.The report also stated that women are disadvantaged in the labour market, with lower paying jobs than men however in Guyana 31.3% of seats in Parliament are held by women. This will lead to higher income and higher social protection for the women of Guyana.

Kenroy Roach, Regional Advisor, UNDP, the Bureau for Latin America and the Caribbean (RBLAC) who spoke about the methodologies, objectives and findings said that “structural challenges have been taken head on”. Roach noted that Caribbean people’s perception of progress deals with economic conditions, education, employment and income, housing and utilities, infrastructure, information communication and technology, which are all important for multidimensional growth.

Minister Jordan noted that constant migration of skills from the region, poverty and unemployment among youth posts serious security risk. These are all obstacles that deter growth and development that will be replaced by opportunities. Effective strategies will be practiced to strengthen social, economic and environmental resilience with the main aim of promoting sustainable growth and development, the minister explained.

Additionally the Minister urged that the forum be held in more suitable surroundings so that the beneficiaries can hear and participate in the discussions.

Research was conducted in ten countries across the region and was initially launched in Barbados..