Caricom as a unit remains relevant, but it needs “to do a lot more” to strengthen its effectiveness in the region. This view was shared by Foreign Affairs Minister, Carl Greenidge in an interview with the Government Information Agency (GINA). 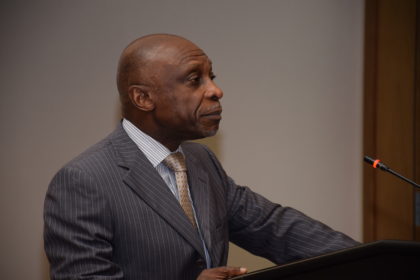 Stronger mechanisms, dialogue and greater awareness are among some of the efforts the Caribbean Community (Caricom) needs to undertake to ensure its continued effectiveness.

Caricom heads will be meeting in July for the 37th regular meeting of the Conference of Heads of Government, which Guyana is co-hosting.

The question of Caricom’s relevance is more glaring in light of the United Kingdom’s (UK) exit from the European Union (EU). Greenidge does not believe that Brexit, as the referendum was called, is a foreshadowing of what could happen to Caricom.

“I don’t see that it has any relevance to the maintenance of Caricom as a unit. It has no relevance in that regards,” Greenidge told GINA, a day before the votes to leave or remain were cast.

The United Kingdom voted to leave the EU Friday, June 24. England and Wales with the majority voted for leave while Scotland, Northern Ireland and Gibraltar voted to remain.

At a press conference on Friday, June 24, Greenidge noted that Brexit is a complex issue, but does not foresee the leave from the EU affecting Guyana’s standing agreements with Britain.

But as for the Region, Greenidge noted that “depending on how they exit, if they exit at all, that will determine what happens in relation to the ACP/EU relationship”. This is the context in which Caricom as a unit stands to be affected.

“There is not likely to be any short-term adverse consequence by way of a curtailing of resource flow or curtailment of access, of let us say, sugar or any other commodity into the European Union,” Greenidge added.

Caricom and the African Caribbean and Pacific (ACP) countries have existing Economic Partnership Agreements (EPAs) with the EU. “The commitments that the EU has to the CARIFORUM and ACP members are legal commitments. They are not commitment of Britain to these countries,” Greenidge noted.

Nonetheless, many Caricom countries are weighing in on the implications of the UK’s exit from the EU on Caricom’s continued existence and the economic impact on the Region.

Trinidadian Economist Indera Sagewan-Alli in an article on Friday, June 24 on the Daily Express’ website questioned whether Caricom will “see a further disintegration towards a more single union.”

Caricom Today’s website reported on the reaction of the Caribbean states following the results of the Vote. It reported Dominican Prime Minister, Roosevelt Skerrit as saying that the effect on the small island’s economy was “felt almost immediately…since the EU would lose a large chunk of its budget and it would have to restructure its whole approach to financing and development assistance.”

Caricom Today also reported that Political Science lecturer Dr Kristina Hinds-Harrison told Barbados TODAY that, “Britain’s exit would also lead to uncertainty on other issues, including immigration, development funding and trade for Barbados and the Region.”

With fears over Caricom’s future now on the forefront of discussion, raising awareness of its benefits is essential now more than ever, Minister Greenidge noted.

“It is an issue that is relevant to the sharing of benefits to the extent that mechanisms are not in place to ensure that benefits accrued into one country or to one sector can be shared then it does act as a sort of a drag on attempts to integrate,” the Foreign Affairs Minister explained.

Caricom needs to ensure that member states “find it worth their while” being a part of the unit. “You need to put in place institution, arrangements that make it possible for all of them to pool their natural and human resources,” Greenidge added.

It is to this effect that the Caricom Single Market and Economy (CSME) was envisioned to strengthen the region. While significant effort has been put forward by the region in opening its market, a “great deal remains to be done” Greenidge pointed out.

The CSME seeks to implement provisions for the removal of trade and professional restrictions, but Greenidge noted that many countries are unwilling to go the final steps. This is an on-going problem for Caricom. “The Caricom market in goods remains reasonably close to a single market,” Greenidge noted. But fears among member states coupled with national policies have restricted the completion of a single economy. “The Caricom market in services, financial services and the like is not yet complete,” said Greenidge.

Making Caricom effective is dependent on CSME functioning as it should along with setting suitable mechanisms in place, Greenidge posited. “Finding appropriate mechanisms for dialogue at the policy level and also encouraging citizens to engage in dialogue across the boards… are the ways I think will prove most effective,” Greenidge added.

Despite the challenges faced by Caricom, the unit has been able to benefit its members. Guyana, through the CSME has found markets for its products in the region. “We are able to sell into the market rice, ground provisions and vegetables, fish products and the like which bring income,” Greenidge pointed out.

This reiterates the relevance of Caricom. Greenidge noted without Caricom, “There would be less trade between the countries, there would be lower incomes generated.”

As a founding member of the integration movement, Guyana has been a significant contributor to Caricom over the years. “We have tried, I believe, on as many fronts as possible to pursue not only to strengthen the membership, but also by providing leadership,” Greenidge said. He added that Guyana supports the initiatives that are intended to defend Caricom’s interests.