There should be no marked changes in bilateral relations between the United States of America (USA) and the Caribbean Community (CARICOM) under US President Donald Trump, CARICOM Chairman and President of Guyana, David Granger said today.

President Granger was addressing media operatives at the closing press conference at the Twenty-Eighth, Inter-sessional Meeting of the Heads of Government of CARICOM at the Marriott Hotel this evening. The President was asked by a reporter whether CARICOM expected that their relationship with the US will change under the Trump administration. 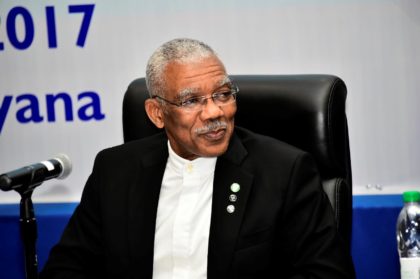 Responding, President Granger answered in the negative. He noted that CARICOM has always enjoyed a cordial relationship with the US and that the regional body was actually engaged by the past three US presidents.

“As you know, President Bill Clinton actually came to Barbados and met the Heads in 1995. There was an engagement with President George Bush, and as well President Obama came to the Caribbean,” President Granger pointed out. He said that CARICOM looks forward to continuing those cordial relations with President Trump.

He noted the on-going relationship between the US and CARICOM as it relates to the Caribbean Basin Security Initiative, as well as the continued cooperation in trade and economic relations.

“We do not anticipate that there is going to be any significant disruption under the new administration,” the President said, adding that the regional body will “wait and see,” and later decide if it must embark on an engagement with the present US administration. “At this time, though, there is no indication that there would be change in CARICOM-US relations,” President Granger reiterated.

“The uncertainty is there, so clearly that has to be settled… the uncertainty cannot continue… our borders are too close to the United States for them to risk uncertainty,” the Prime Minister said.