Partnership for the Protection of Children is the theme under which the Ministry of Social Protection, Childcare and Protection Agency (CCPA), along with the Ministry of Education and the Guyana Responsible Parenthood Association (GRPA) continued their work in Region 9, raising awareness on child abuse, as they arrived in Lethem on 20th June 2017.

The team met with Mr. Sherwyn Wellington, Deputy Regional Executive Officer of Lethem, to discuss the purpose of the trip in addition to the needs of the community and how collaborations can be had in order to deal with the issue of child abuse in the region. Mr. Reddy and the representative of Blossom Inc. also made a visit to the Regional Education Officer, Ms. Marilyn Sears, to discuss issues which may be affecting the area.

Ms. Canterbury took the opportunity to check in on the day care facilities and start the process for these establishments to be properly registered with the CCPA. There are currently three daycare facilities in the area; these include Micky’s Playgroup, Sunshine Playgroup and Daycare and Little Angel’s Daycare. The registration process is at the stage where the daycares have to acquire their police clearance, food handler’s certificate and undergo a building inspection in order to acquire their license. 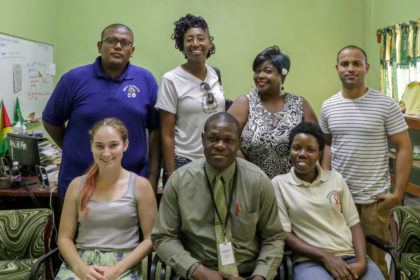 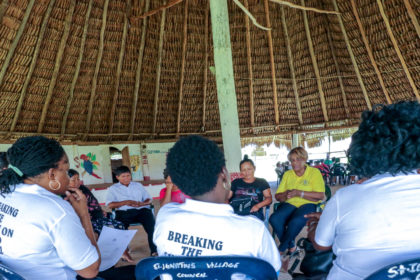 Representative of Blossom Inc makes a point during the Special Needs Teacher’s Training as Mr. Reddy and Ms. Bess can be seen looking on 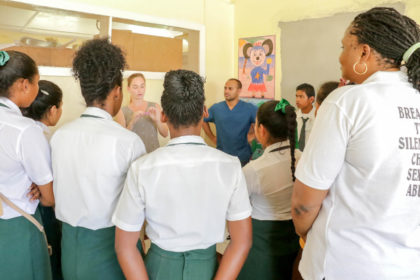 Clohisy interacts with students at the Community’s Health Center 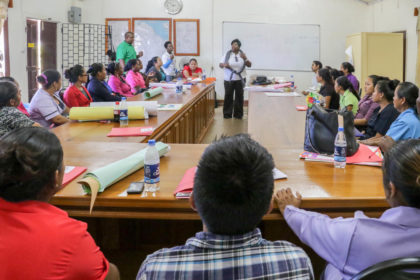 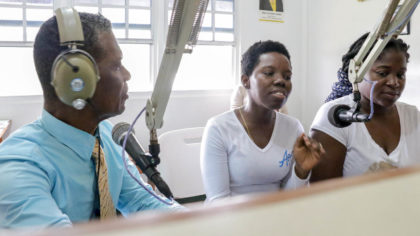 On June 21, 2017 the team conducted another awareness session at the St Ignatius Community Benab. There were two sessions being conducted simultaneously; one with students and the other with the adults. The children of the St. Ignatius Secondary School had an interactive session with Ms. Meusa, Ms. Clohisy and Dr. Wrong. Clohisy educated the children on the negative effects of early sexual activities while Meusa spoke on the rights of the child, child abuse and the “tell” campaign. The importance of speaking to a responsible adult if touched inappropriately was one of the focus points of the session. After discussions, the students were invited to do a short skit to showcase the knowledge imparted to them.

The adult session was conducted by Ms. Bess.  In this session the responsibilities of the parents were discussed; those present were informed of the services provided by CCPA and how they can go about accessing these services when required. Ms. Yusa Xavier, Tashoa of the community of St. Ignatius, was also in attendance and praised the Ministry of Social Protection and all other stakeholders for conducting the session at such an opportune time. Ms. Bess also informed those present of the importance of registering a child at birth; an issue which is often times overlooked in the community. Discussion surrounding the Protection of the Child Act 2009 and the Sexual Offences Act 2010 were also had.

Currently, Lethem does not have a Childcare Probation Officer and as such Ms. Bess, who has responsibility for the Region, established a community watch group on 21st June 2017 to help the CCPA with the reporting of cases.

Ms. Sankar and Mr. Reddy met with the police officers to check in on the child sexual assault cases which would have been reported in the area. Additionally, the team met with the officer in charge and ranks of the Sexual Offences Unit, CID Department, where they were oriented on the National Protocol for Multidisciplinary Team. Emphasis was placed on the single interview, child friendly, developmentally appropriate approach with children and the importance of the involvement of a probation/child protection/welfare officer during the interviewing process. Police Officers expressed their difficulty, sometimes, in interviewing female victims as there is need for female ranks in the area; all ranks in the are currently male. Further, it was noted that most child abuse cases which were reported were not reported to CCPA; they were reminded that these cases, even if reported to welfare/probation officers, must be reported to the agency.

The team also met with a group of teachers who were conducting a Special Needs training. The importance of having discussion at this session was recognized as it is difficult for special needs children to tell in circumstances in which they are abused. The teachers were given skills to detect where abuse of special needs children may be occurring. The session also focused on the responsibilities of the teacher and the importance of reporting child abuse cases to the agency.

The peer educator from GRPA also did a session with some Form 4 and 5 students at the community’s Health center. It was a very interactive session where the students were asked questions to test the extent of their knowledge as it relates to sex, STIs and the negative impacts which can be had from engaging in early sexual activities.

Due to the high incidence of child assault in the community of Annai, the team returned on Thursday 22nd June 2017 do a session on the community’s radio station 97.1. Ms. Bess and Ms. Meusa took lead in this interview. They gave an overview on the CCPA and the services offered by the agency. Child abuse was the topic at hand, however the two ladies placed much emphasis on high incidences of child sexual abuse; as teenage pregnancy is a major issue within the region.  Further mention was made as to the importance of reporting cases of child abuse.

Mr. Reddy expressed the same sentiments as the two ladies during his visit to the Annai Secondary school and the Annai Dormitory.

Throughout the entire outreach all communities were constantly reminded to report all incidence of child abuse to the CCPA to their hotline number 2270979. It is our duty to take care of our nation’s children as together we build “Partnership for the Protection of Children”.