Minister of Communities, Ronald Bulkan, said he hopes the three-month suspension of the parking meters will allow the Georgetown Mayor and City Council to renegotiate their fees with Smart City Solution. 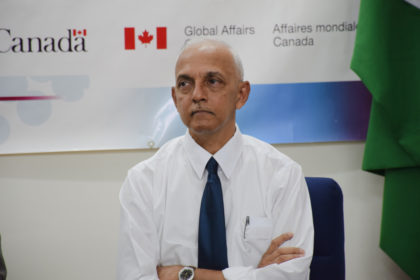 According to the minister, central government is not opposed to paid parking but, hopes that consultations will be held between the City Council and stakeholders to establish a common ground using the recommendations made by the Ministries of Legal Affairs and Finance.

“It is expected that the municipality and the councils will more meaningfully take into account the recommendations that were made, in essence, some of the major concerns as made by the Central Government and the public that relate to the duration of the contract, especially the disproportionate nature of the benefit that will accrue under this contract,” the minister said.

Persons were being made to pay $232 per hour of parking in the designated areas.

Bulkan said that he supports the idea of parking meters within the capital city since it will regulate the traffic as well as parking.

The minister noted that the City Council’s efforts should also be directed to other violations of the city’s by-laws including building violations, noise pollution and other breaches of the municipal and local governance.

Earlier this month, cabinet suspended the parking meter project for a period of 90 days due to the exorbitant fees and lack of transparency surrounding the contract between Smart City Solutions and the Council that had led to members of the public requesting the revocation of the project.

During a post cabinet media briefing, Minister of State, Joseph Harmon, had said there were other concerns raised by Cabinet pertaining to the cost of parking in the jurisdiction of Georgetown, the provision for the parking of police, army and fire service vehicles and ambulances, the financial arrangement of the project and the need for greater involvement of stakeholders in the process.