In March 2011, 60-year-old, Ruth Richmond a mother of four was diagnosed with cervical cancer following a Pap smear test at the Georgetown Public Hospital Corporation (GPHC). 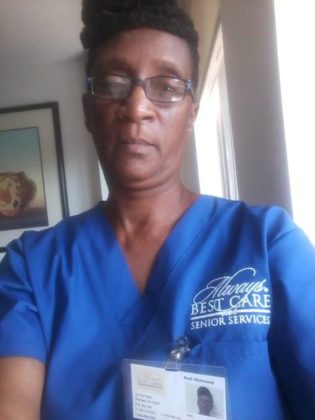 Richmond of Paradise Housing Scheme, East Coast Demerara, after being diagnosed with cervical cancer was advised by doctors to immediately undergo the Chemotherapy cycles.

“Before starting the treatment I had to do a Computerized Tomography (CT) scan to determine if the cancer had spread to other parts of the body. That was the first step and after I did the scan, the treatment was recommended, which is four cycles,” Richmond said.

She explained that “A cycle is a period of treatment followed by three weeks of rest. After the discovery, I also changed my diet completely. No dairy products, no sugar, no meat. I used a lot of peas, vegetables, and fruits especially sour-sop.”

After completing the four cycles of chemotherapy, Richmond said doctors still found signs of cancer cells in her cervix, which meant her undergoing the process of radiation therapy.

According to WebMD, Radiation therapy treats cancer by using high-energy waves to kill tumor cells. The goal is to destroy or damage the cancer without hurting too many healthy cells.

The mother of four explained, she took 25 sessions of radiation therapy which she described as similar to chemotherapy but more aggressive. Losing her hair was one of the side effects of the therapy. However, after a period of two years, the cancer was gone.

“After the radiation sessions I had to do another CT scan and then the doctor told me the cancer was gone. I felt well during the process of radiation, though some days I did not feel too good, I still kept positive,” she highlighted.

However, Richmond, a staunch Seventh-day Adventist, believes that despite all the therapy, God was her ultimate healer.

“From the beginning, I turned to God, I prayed a lot and trusted him for healing because I didn’t want to die. I also had an anointing service done by two pastors.”

She is advising others who have been diagnosed with cancer to be positive and undergo the chemotherapy and radiation therapy, despite the stigma attached to it.

“People will say things to discourage you, but be positive and turn to God…Also, remember that diet is a very important part. Many of the things we use cause us to get sick, so if you have to change your diet do so,” said Richmond.

Since 2013, following the chemotherapy and radiation therapy, Richmond has been cancer free.

According to PAHO/WHO and Public Health data reviews, cervical cancer is the second most common cancer among Guyanese women.

The HPV vaccine to prevent cervical cancer among girls in Guyana arrived here in 2011 and was officially launched by the then Ministry of Health in 2012. It was re-launched again in 2016 under the now Ministry of Public Health in collaboration with Merck Sharp and Dhome (MSD). A countrywide HPV vaccine campaign is slated for October 16, 2017.

As part of celebrating Breast Cancer Awareness Month, the Public Health Ministry will be conducting cancer awareness outreaches during the month in Linden, Supenaam, Skeldon, and Georgetown. During the outreach, officials will be conducting breast cancer screening and Visual Inspection with Acetic Acid (VIA) screening for cervical cancer.