Fulfilling its promise to the people of Guyana, the Central Housing and Planning Authority (CH&PA) has commenced its approximately $745 million electrification project to some sixteen government-led communities across the country. 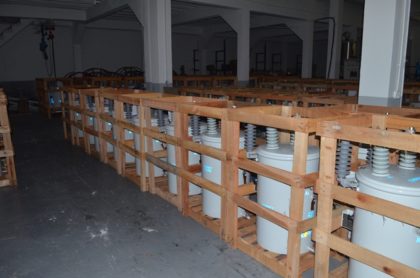 Some of the Transformers to be used in the electrification project, stored at the Fix It bond, Main Street Georgetown.

The CH&PA last week commenced the first phase of the project – planting poles in the communities of Farm and Barnwell on the East Bank of Demerara and Hope/ Experiment/Baltyrock on the West Coast of Berbice.

CH&PA’s Electrical Engineer, Davendra Ramnarine today said most of the materials have arrived in the country. It is hoped that work in both the Farm and Barnwell communities could be completed by the end of this year.

The electrical engineer and team took the Department of Public Information (DPI) on a tour of the Barnwell and Farm communities as well as the bonds where the materials are being stored.

“So far, our line materials are here; whereas the transformers are stored at Fix It depot and the cables are being stored at the Laparkan bond,” Ramnarine told DPI.

“Work has commenced in terms of pole planting. That is our first phase and second phase will be the stringing of the conductors. We expect to start that phase sometime next week and work will continue with a planned date of achieving some, if not all of those areas by the end of 2017 December,” he said.

According to Ramnarine, the project is a four-month contract, which was signed last week. He is optimistic that all 16 communities should be fully served by the end of March 2018.

Back in September of 2016, Minister within the Ministry of Communities Valerie Adams Patterson-Yearwood allocated some $900 million for the electrification project in housing communities for 2017. Altogether, some 38,000 homes are expected to benefit from the service of the government housing unit. 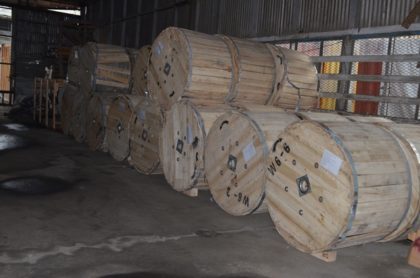 Conductors (Cables) property of the Central Housing and Planning Authority, stored at the Laparkan Wharf. 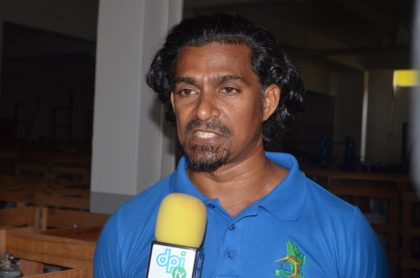