Citizens must be aware of the “ills of corruption” – AG Williams

Members of the disciplinary services, legal bodies and other public officials in the Essequibo Islands-West Demerara (Region Three) were engaged in a one-day seminar which focused on combatting the prevalence of corruption in public offices.

This session was held at Regional Democratic Council (RDC) Boardroom at Vreed-en-Hoop on the West Coast of Demerara. Giving brief remarks at the opening of the session, Attorney General (AG) and Minister of Legal Affairs, Basil Williams S.C, informed those gathered that the purpose of the seminar is to ensure persons sensitised to the “ills of corruption” so they can identify such acts and not become enmeshed in it.

The AG reminded that one of the government’s mandates the elimination of existing corruption and the prevention of future occurrences, thereby safeguarding the economic stability of the nation.

Since assuming office in 2015, the APNU+AFC Coalition has been made aware of existing corruption within the public service and embarked on a strategy to combat this problem. This Anti-Corruption sensitisation seminar is one of many being hosted in all ten administrative regions, giving public servants the opportunity to benefit from the knowledge of newly enacted anti-corruption Bills and Acts. 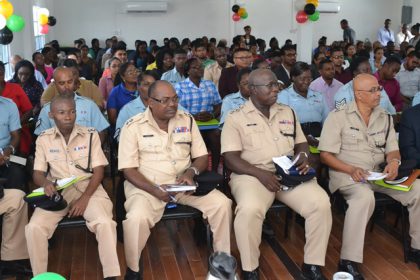 Those in attendance at the sensitization seminar.

“Any government would want to know that their workforce is sensitised about the ills of corruption,” the AG said. “We were talking about corruption in a generic sense but they are now (looking) at fraud and bribery and you know from the onset that the president said he wants a non-bribable public service.”

Thus far, three sensitisation workshops have been hosted in Regions Ten, Two and Four and the response from the public service has been overwhelming. Discussions emanating from these indicate that the ‘Whistleblower’ Act, and the conditions surrounding this, drew the most attention.

All questions brought by persons relating to the Acts will be addressed, thereby ensuring the attendees have a clear understanding of the rules and regulations governing these Bills and Acts and the public’s adherence to the laws.

In coming months, sensitisation seminars will be hosted in Berbice and other areas to be announced. Also, during the month of April, an Anti-corruption awareness walk will be held under the aegis of the State Assets Recovery Unit (SARU)