The Mayor and City Council (M&CC) has launched a trust fund for the restoration of City Hall and has already received pledges amounting to $5.2Million.

The largest was from Impressions Branding which promised a contribution of $5Million following Wednesday’s launch.

The cost to repair the iconic building is estimated at some $1Billion. 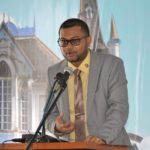 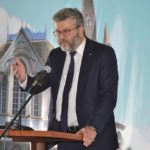 His Excellency Ponz Canto, Ambassador of the Delegation of the European Union (EU).

A section of the gathering at the ceremony today.

Mayor of Georgetown, His Worship Pandit Ubraj Narine noted that a Special Committee was set up to manage the fund.

He explained that there would be three statutory signatories to the chequing account; the municipality’s Treasurer, and representatives from the private sector and the National Trust.

“It bleeds my heart when I see that one of our historic building is falling apart and I believe that we all as Guyanese must work to build City Hall,” Mayor Narine stated.

He called on the private sector, civil society, the Georgetown Chambers of Commerce, stakeholders and Guyanese abroad to play an integral role in saving the famous landmark.

According to the Mayor, the intention is to establish accounts in various banks countrywide where persons could make contributions toward the project. Currently, deposits can be made into account number 4023313 at Demerara Bank.

Ambassador of the Delegation of the European Union (EU), His Excellency Ponz Canto remarked that City Hall was an example of the nation’s architectural patrimony and potential richness.

The EU had contributed some $60M (300,000 euros) for the feasibility study which was completed in 2018  and Ambassador Canto pledged their continued support.

The EU and the National Trust had partnered on a Comprehensive Restoration and Sustainable Conservation Management Plan which was presented to Minister of Social Cohesion, Hon. Dr. George Norton, in July 2018.

Key findings indicated that City Hall could be restored in single or multiple phases, and that income could be generated from commercial usages such as a gallery or museum.