Taking time out of his busy schedule on Wednesday, Mayor of Georgetown, Ubraj Narine made an appearance at the Valmiki Vidyalaya High School where he donated to the school’s newly established sports society.

Speaking to the Department of Public Information (DPI), Vice Principal of the school, Rodley Mathoo said that the teacher and students are appreciative of the donation.

Mayor of Georgetown, Ubraj Narine hands over a donation to the President of the Valmiki Vidyalaya High School sports society.

The Valmiki Vidyalaya sports society is currently participating in the Forbes Burnham Windball Cricket tournament and has won all the matches played thus far, in the competition.

The Vice Principal also noted that school is also working towards attending the Gary Sobers Hardball Cricket Tournament in Barbados in June 2019 and the donation couldn’t have been timelier.

Sharing his story with the students, Mayor Narine recalled that growing up, he too faced challenges and hardship. He resolved that later in life whenever the opportunity provided itself, as he would always seek ways to help others. The Mayor said now that he is in charge of the largest constituency in the country, he will better be able to assist the citizens of Guyana.

He urged the students to never give up and continue to strive for excellence. 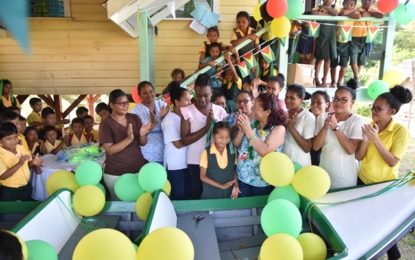 Author Details Synieka Thorne Author email synieka.thorne@dpi.gov.gy DPI, Guyana, Tuesday, February 25, 2020 Sebai, a riverine village in the Matarkai sub-district, Region One, is the latest beneficiary of a boat and engine to aid in medical emergencies within the village. The vessel was handed... END_OF_DOCUMENT_TOKEN_TO_BE_REPLACED