The Coalition Government has unveiled a roadmap of the transformation that will enhance the country’s public infrastructure,

Within its 32-paged manifesto, infrastructural improvement is at the top of the list under the Coalition’s economic programme.

Concerning massive roadworks, the Coalition plans to continue its work on the rehabilitation and construction of the Linden-Soesdyke Highway and the Mahaica-Rosignol, Palmyra-Moleson Creek and Supenaam- Charity roadways. 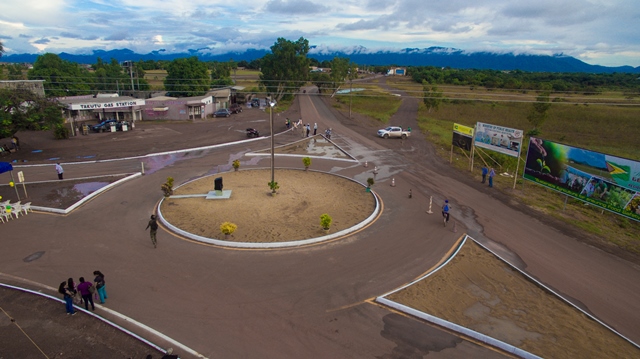 Aerial shot of the roundabout at the Barack Retreat Highway, Lethem.

The realisation of the new Linden-Lethem paved carriageway with access to deep water harbours and upgrades to the Linden-Kwakwani road are also in the pipeline.

Also outlined is the construction of the East Coast-East Bank connecting road, a project whose feasibility studies are complete with project designs in its final stages.

To boost land development, enhancement of the Parika-Gonshen road is also listed among the Coalition’s priorities.

For the hinterland Region, plans are on stream to continue linking hinterland villages to all-weather roads thereby increasing access to economic activities in areas that are farming, logging mining oriented.

The hinterland work programme under the Public Infrastructure Ministry forms part of His Excellency President David Granger’s vision of reducing the disparities that may exist between the coast and the hinterland.

Continuing with its flagship riverfront development projects, the Coalition intends to bring to fruition the Georgetown Waterfront Development Project that provides for the building of a boardwalk at the Kingston to Ogle seawall. This project will facilitate safe, family-friendly recreational activities.

Other riverfront facilities to be constructed are stellings at Vreed-en-Hood and Parika. Once completed, these will join the Supenaam and Bartica waterfront projects that were spearheaded under the Coalition Government.

For the first time in decades, the reintroduction of a public transportation service will become a reality. The Coalition intends to execute this massive undertaking of public buses and ferries along with the provision of subsidies for elderly, school children and persons living with disabilities.

To further enhance the way Guyanese commute, a new high-span bridge across the Demerara river is on the cards. Earlier in January, Minister of Public Infrastructure Hon. David Patterson noted this undertaking can be completed by 2022.

On the aviation front, upgrades are also slated for the Matthew’s Ridge, Linden and Lethem aerodromes, the latter is already underway with airstrip paving works. The Coalition plans to transform Lethem’s aerodrome into a regional airport, similar to the Eugene Correia International Airport.

One of the other priorities within the Coalition’s mandate is to continue the renovation of drainage infrastructure so that flooding can be minimised, particularly in low-lying areas. These efforts will be bolstered by the construction of more pump stations in vulnerable locales.

The manifesto that will guide the Coalition’s Decade of Development has been launched under the theme: Together Let’s Move Guyana Forward.”