Teachers in every region are slated to get a salary increase in 2020 as recently announced by Finance Minister, Hon. Winston Jordan. In this regard, committees have been appointed to examine the salaries and allowances for teachers and other public servants.

Members have already been appointed to the committee that will examine proposed increases in wages and salaries for teachers. It is expected that this committee will begin talks soon to ensure the process is completed promptly.

This is in keeping with the investments the Coalition Government has been making in teachers and serves as direct testimony to the seriousness of this administration’s commitment to providing a good life for all.

His Excellency, President David Granger, was recently quoted as saying: “We are on the way to developing an ‘education nation’. We are overcoming the challenges of people’s willingness to go into the teaching profession.”

The president emphasised that for his government, investing in education is not just a promise but rather “we have put our money where our [mouth is]… I will continue spending money on education because it is the most important public service we could provide to our citizens,” he explained.

Because of his belief in improving the quality of teaching, the Head of State implemented the One Laptop Per Teacher programme. This, he believes, will allow for greater 21st-century education delivery nationwide.

“Thousands of teachers now have laptops and they will be able to teach their students and eventually I would like to see in every classroom, children getting away from blackboards and using computer screens.”

President Granger announced that among the Coalition Government’s top three achievements in education is developing a happier corps of teachers.

“We are making things better for teachers.” 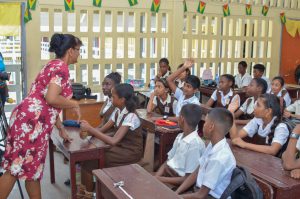 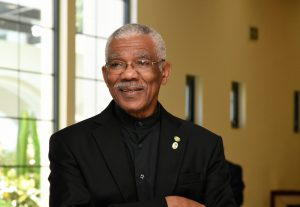 Also referring to the whopping salary increases that teachers have benefited from, in just less than one term under the stewardship of this administration, the president cited the more than 50% increase in the minimum wage for teachers and public servants.

“The lowest-paid teachers are much better off, and we will continue to work with the [Guyana Teachers’ Union] so that the issues facing teachers are dealt with.”

He pledged his continued support to ensure the improvement of teachers’ accommodation facilities which he described as vital to the educators for them to perform their best when placed in Hinterland areas.

The improvement of living quarters and increase of allowances afforded to teachers placed in hinterland areas will improve the quality of life for teachers and therefore, the quality of teaching being delivered to students.

“Many teachers are married, they have children… We want to make life more comfortable for them,” His Excellency noted.

The president remarked that the preexisting challenges within the education sector are being gradually overcome, and he is most proud of the investments his government has made in four years. In this period, the government has invested over $172Billion towards education, representing the single largest investment in its people.

The Minister of Education, Hon. Dr. Nicolette Henry, since taking office in 2017, has reiterated her support for Guyana’s teachers. In 2018, she was quoted as saying: –

“I value greatly the service you give to the country. I want to be on record acknowledging that service. I know that you are ordinary people, that do extraordinary things every day… We get up and we come every day, and we work for the interest of the nation’s children, and so I am with you, and I will never lose sight of the prize.”

In 2018, teachers also benefitted from an increase in stipends while $3Billion was allocated to boost teachers’ training. The ministry is also developing a new curriculum for the first time since 1976.  Several schools across Guyana also welcomed 355 newly trained teachers.