Residents of the Barima -Waini Region 1 turned out in their numbers in support of the Coalition rally in the Mabaruma Township, on Wednesday.

In her remarks Minister of Foreign Affairs Hon. Dr. Karen Cummings said that the Coalition is the only viable option to continue moving Guyana forward.

“Our track record in just five years speaks for itself. The many achievements were realised through the hard work, dedication and commitment of a government that truly cares for the wellbeing of all Guyanese,” she noted. 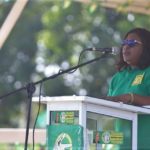 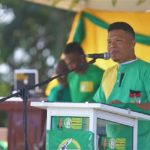 Ronald Cox young community leader in Mabaruma shares his views on the work of the Coalition Government with those gathered at the rally.

Of major significance the Minister said, is that Guyana has jumped 34 places upward on the Transparency International (TI)’s Corruption Perceptions Index (CPI) for 2019. Guyana is now ranked 85th out of a total of 180 countries surveyed by TI.

It is now ranking alongside regional counterpart Trinidad and Tobago, and Kuwait among others. According to the TI report, only 22 countries over the last eight years, have significantly improved their CPI scores. These include Greece, Guyana and Estonia. Further, Guyana ranked 124th out of 175 countries surveyed by Transparency
International.

“Guyana had the embarrassing distinction of being known as the most corrupt country in the English-speaking Caribbean under the previous administration. Today, the David Granger led Coalition Government has restored our country’s international integrity which is being heralded by the international community at all levels,” Minister Cummings said.

She pointed out that major strides were also made in major sectors in Guyana including health, education and public infrastructure. The Government invested billions in the education sector since taking office in 2015 and has significantly increased the
annual budgetary allocation from of $40.3Billion in 2016 to $43.1Billion in 2017, $44.1Billion in 2018 and $52.3Billion in 2019.

Roads and bridges were constructed in communities for the first time, especially in the hinterland.

“Lethem, Mahdia, Mabaruma, Bartica, Paiwomak, and Orealla all have their own radio stations. Yes, people living in the hinterland regions of Guyana have access to their own local radio stations in 2020,” she added

The opposition she notes had 23 chances and failed. Today Mabaruma is much improved and continues to improve Minister Cummings said.

Ronald Cox, a resident and community leader in Mabaruma, also spoke of the transformation realised not only in Mabaruma but the entire Region One over the last four years.

Radio Mabaruma he said has contributed to the social development of the residents in the township. The soon to be commissioned solar farm in Mabaruma, will see each home receiving 24 hours of electricity.

This project was executed at a cost of over $225Million.  The Kumaka Bridge that previously blocked the drainage system and flooded the Barabina road, was replaced with a brand-new concrete structure. The roads from the Brooms Airfield to Kumaka were upgraded to concrete structures at a cost of some $110Million.

Cox said the Yakarita road is now a highway and travel time to the market has been reduced by more than half. Additionally, the Barabina road saw $59.9 Million being spent on upgrades.

Over in Moruca, the Bimehi Airstrip was paved and extended, and a new concrete bridge was constructed linking Kumaka and San Hose he reminded.

“President David Granger’s vision is for inclusive development…You cannot ask investors to come and you do not have roads, electricity and water. This government has upgraded infrastructure and we will now see investors coming,” Cox underscored.