Secretary General (SG) of the Commonwealth of Nations, Baroness Patricia Scotland on Tuesday paid a courtesy call on Minister of Indigenous Peoples’ Affairs, Sydney Allicock and Minister within the Ministry, Valerie Garrido-Lowe.

During that visit, the Baroness commended Guyana for its pivotal role in combating climate change through the work of the Iwokrama International Centre for Rainforest Conservation and Development.

“The contributions that Iwokrama make to that climatic stability is incredibly important and so I think it’s to be applauded, the way Guyana, for the world, has sought to harvest the good things that come out of Iwokrama and preserve them,”  Baroness Scotland stated.

The Baroness urged that Guyana take into consideration carbon farming as a way to slow down the rapidly changing climate. Carbon farming is cultivating in such a manner that greenhouse gas emissions are reduced. 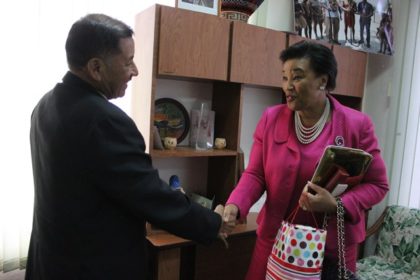 “Many countries in the world now are trying to meet their COP21 commitments and the question is how can they do that within the same framework of their countries, so they will be looking for other countries to assess and to assist,” the Commonwealth SG explained.

Guyana was also praised for preserving its natural resources which also play a role in the battle against climate change. “Guyana is one of the richest countries in terms of natural resources- the wonderful flora, fauna, trees- Guyana has everything- gold, diamond, oil so in terms of how we assist is incredibly good, not just for Guyana, but for the whole region,” Baroness Scotland opined.

Minister Allicock thanked the SG for her visit, noting that the Government of Guyana will continue to play its role in the battle against the effects of climate change.

Minister Allicock explained that Guyana is moving towards the use of renewable energy especially in the hinterland communities, pointing out that residents of the indigenous communities were finding it challenging to understand climate change. However, he emphasised government’s efforts towards providing them with the necessary information and by ensuring they have access to radio and the internet.

In addition, the Minister noted that once partnerships are continued between the Commonwealth and Guyana, achieving the ultimate goal is inevitable.

The visit by the SG coincides with her participation in the current CARICOM 37th Heads of Government Conference in Guyana.