Georgetown, Guyana – (July 1, 2016) Minister of Social Cohesion, Ms. Amna Ally, earlier today, met with several representatives of the newly formed group, ‘Indian Vision for National Harmony’, to discuss their objectives and how the Ministry and organisation can collaborate to achieve the vision of national unity and social cohesion.

The members also used the opportunity to invite Minister Ally to their official launch next month, an invitation, she accepted on the spot.

Leader, Mr. Sheik Mustapha in an invited comment, said that the village based group from West Coast of Demerara. Mr. Mustapha said that the idea for the group was born after the May 2015 General and Regional elections, when he said that community members witnessed incidents of verbal abuse and discrimination due to the political affiliation.

“Well we supported this Government at the last elections and because our village is predominantly a PPP/C area, persons have been talking bad and so and we want to change that. We want to show them that the Government is for everyone and that we are the ones who decide who goes there and it shouldn’t be about who is [Indo-Guyanese] and who is [Afro-Guyanese],” he said. 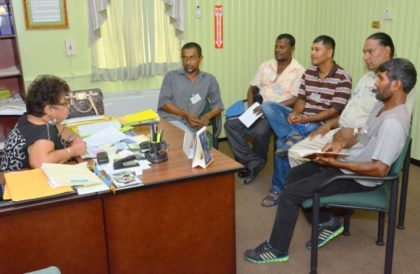 Minister Amna Ally in discussion with the representatives of the Indian Vision for National Harmony group, during their meeting at her office, earlier today.

Mr. Mustapha said that the group has begun planning a series of activities including lectures by prominent persons, to speak to the issue. “We want people to understand division, the causes of division and how the politicians use that division for their own selfish purposes so we are going to focus on that in our lectures,” he said.

Meanwhile, Minister Ally said that she was pleased by the efforts, which have been undertaken by the group and her Ministry looks forward to collaborations.

“Their interest is to promote social cohesion. They are upset with the existing situation… and they want to inculcate [the spirit of] us living in Guyana as Guyanese. They are going to officially launch their organisation in August and they have asked me to endorse it and I will because I love such an organisation and our business is social cohesion and national unity. I really welcome their offer in this respect,” Minister Ally said.