Minister of State, Joseph Harmon said that companies which are awarded contracts in the single sourcing process have been scrutinised and pre-qualified.

Minister Harmon was speaking at a weekly post-Cabinet press briefing at the Ministry of the Presidency, today. 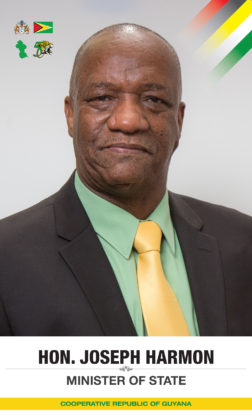 On the matter of the awarding of contracts for projects, Minister Harmon explained that contracts are made at the level of the government ministries when a project is identified. He said, “There is an evaluation committee that evaluate, the evaluation committee makes its recommendation to the National Procurement and Tender Administration Board (NPTAB). After the National Procurement and Tender Board deliberate on the contract, they finalise their position on it, after which it is sent to Cabinet for its no objection.”

Minister Harmon reiterated that until such time that a contract is sent to Cabinet from the NPTAB, Cabinet will not be able to make a determination on the contract.

“If you go back to the auditor general’s report from that Ministry (Ministry of Health) , going as far back as 2011 to 2014, you will see what was the process…So in fact what you are seeing in 2017, is a result of a process that was well-established as far as pre-qualification is concerned,” Minister Harmon said.

Minister of Health, Volda Lawrence last week, issued a statement on the emergency purchase of $605M worth of drug supplies from Ansa McAl. Minister Harmon said that the minister will make a further statement on the matter.