Construction of the low, middle and moderate income model houses for display and sale at the Central Housing and Planning Authority’s (CH&PA’s) “Housing Solution 2017 and beyond exhibition”, is underway. The housing exhibition is set for May 1-5, 2017. 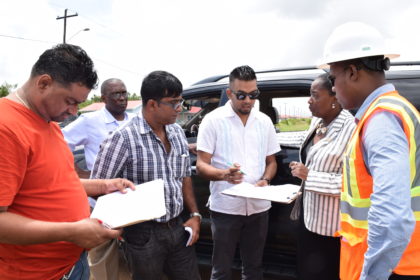 Minister in the Ministry of Communities, Valerie Adams-Patterson, Project Director Kennard Dazzell and Project Director (acting) Omar Narine at Perseverance, East Bank Demerara where preparatory work is on-going for the Housing Solution 2017 and Beyond exhibition

Today, Minister within the Ministry of Communities, Valerie Adams-Patterson and a team of officials visited the exhibition site at Perseverance on the East Bank of Demerara, to check on the progress of the preparatory works.

The Minister, who has responsibility for housing, said that she was pleased with the pace of the project. “I am very happy with what I am seeing on the ground. It tells us that the people are buying into this whole project, the exhibition, and I can tell you, come May, we are going to have a fantastic event going here,” the Minister said in an invited comment to the Government Information Agency (GINA).

Works on the houses began two weeks ago and the foundations of six houses have been completed thus far. The project caters for the construction of 10 low income, five moderate and eight middle income houses by local contractors and six duplexes and two single units by the CH&PA.

The project is also aimed at significantly reducing the 25,000 housing applications’ backlog within the CH&PA system, and to have the 28,000 vacant house lots across the country occupied by facilitating opportunities for engagement between the public and the developers. 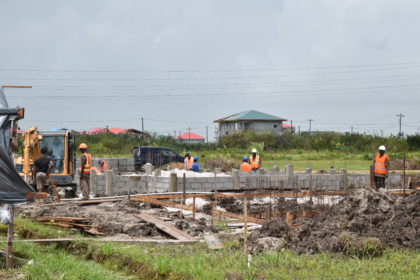 CH&PA will be using its existing resources from its 1000 Homes project to build its eight units. The authority will be constructing duplexes of three designs and flats houses on stilts.  “What we are actually creating here is a model village; in this model village none of the potential owners, those who will buy can modify the houses until after five years,” Minister Adams-Patterson explained.

Eyes on the Ground Agency and Vision Village are constructing the model homes.  The contractors have 14 weeks to complete the houses in time for the event. To ensure the timely delivery and quality of work, the contractors must submit weekly progress reports to the CH&PA.