It was an explosion of Linden talent at the official opening ceremony of Linden Town Week (LTW) 2019, which took the form of a cultural extravaganza.

The ceremony this year was aimed at highlighting local talent which, according to Mayor of Linden, Waneka Arrindell, is the overall aim of LTW 2019. In her opening address, Mayor Arrindell noted that there is much to be discovered as it relates to talent in Linden, and this is the season of discovery. 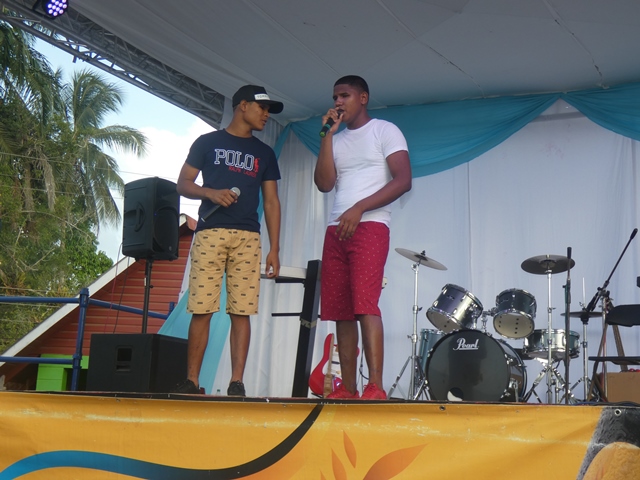 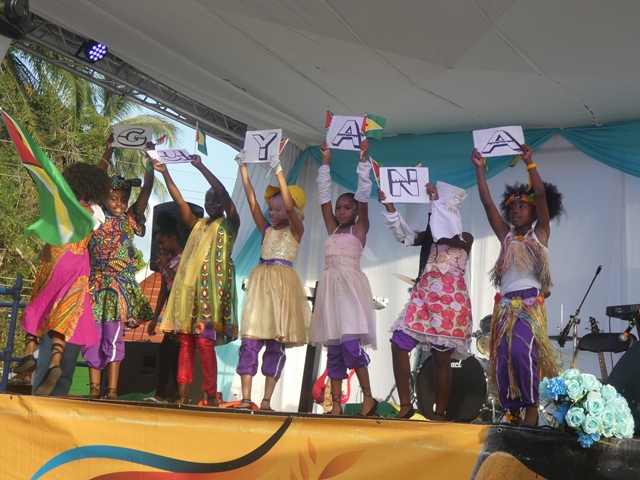 Linden students performing a patriotic dance for the audience. 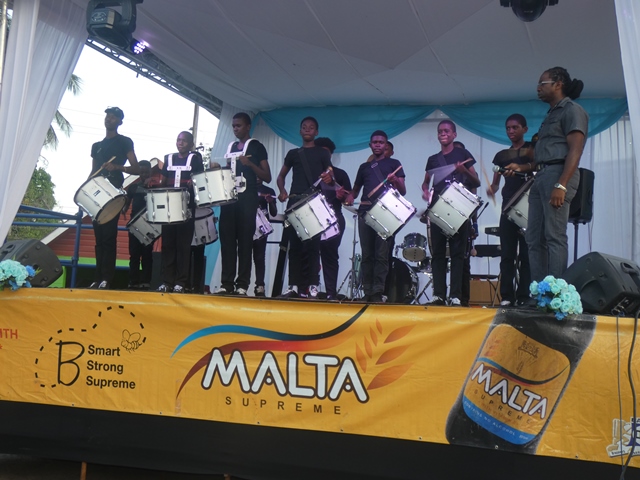 The Linden Constabulary Youth Band doing a drum performance for the audience.

“The aim is to bring out the talent we have in our own township, there are people who can sing, who can dance, who can write poetry, Town Week is the time, for you to showcase that talent to the rest of the world.”

The Mayor encouraged Lindeners to fully participate in every activity.

The ceremony commenced with a grand military parade with participants from the Joint Services based in Linden, marching through the Republic Avenue captivating the crowd with their precision and choreography.

The cultural extravaganza saw Lindeners showcasing their talent through dance, song and drumming amongst other cultural items. The highlight of the afternoon’s proceeding was the performance by two visually impaired brothers who sang their song ‘Is Town Week Time Again’. Seventeen-year-old Relon and 15-year-old Roell Sumner, of Blue Berry Hill Wismar, wowed the crowd as they showed despite their disability, they will soon be forces to reckon with in the local music industry. Local singer ‘Black Chiney’ also performed an original LTW song, while other groups performed various songs and dances, all in an effort to highlight local talent.

The opening ceremony marks the second of 11 days of events which forms part of the LTW calendar with over 60 activities. This year marks the 23rd edition of LTW and coincides with the town celebrating 49 years of existence. It is being observed under the theme ‘Rekindling our culture,’ and is being hosted by the Linden Mayor and Town Council (LMTC).

Giving an overview of how LTW began 23 years ago, LMTC Councillor and Coordinator, Norville Fredericks said the idea was birthed out of the desire to see Linden showcase its economic, social and cultural potential. The first Linden Town Day was held in April 1996 and received an overwhelming response. It then increased to a weekend of activities before becoming an entire week. To date, LTW remains the most anticipated event of the year which draws hundreds of patrons from all parts of Guyana and the diaspora. The concept was also adopted by other towns in Guyana.

LTW 2019 will culminate on the May 1. Events throughout the week can be enjoyed by all groups of persons; young, old, children, sports fanatics, party goers, Christians, fashion icons etc.

On Monday, activities will go into full swing with a women-in-business seminar. Christians can enjoy a gospel fest, featuring international gospel artistes. Other highlights for the rest of the LTW include poetry, folklore and storytelling, and art exhibitions, Golden Taste Glow party and on-the-spot Art, Rasville Breakfast on the Sand Linden All Black Party, a Caribbean Food Festival and Children’s Fest and the Main Big Lime.

In addition to these events, the week will be filled with sporting activities such as the Guinness in the Street football competitions, cricket, basketball and circle tennis contests as well as athletics. Students will participate in a spelling bee, debating and essay competitions. There will also be exhibitions such as a Farmer’s Market, a Caribbean Food Festival and throughout the week various dining houses will host a Restaurant Day.