(Ministry of the Presidency, July 19, 2016) – In continuing the efforts to remove barriers to the access of education, the Ministry of Social Cohesion, on Friday, rewarded the top performers of the 2016 Annual Grade Six Assessment 2016 from Cuyuni -Mazaruni (Region Seven), with bicycles and books bags, to further encourage them in their academic pursuits. 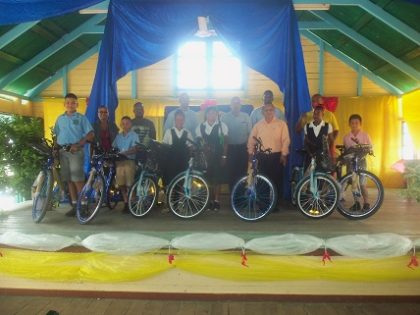 Charles Holmes, Regional Education Officer, in extending congratulations to the students, said that their hard work and long hours have indeed paid off.

“Congratulations to parents who worked so hard and the Head Mistress and all persons for grooming our future leaders. The Department of Education places emphasis for children to learn and for them to excel. I have no doubt that these children will excel in their future endeavors. I will be listening in the future for good things,” he said.

Holmes also spoke highly of the Five Bs (Boats, Buses, Bicycles, Books and Breakfast) programme, from which the region has benefitted, as he noted that it has created significant changes in the education sector for the region.

The school bus makes four trips a day, ferrying 200 children per trip while a school boat for the children of Goshen, Essequibo River and footwear to all the schools in the region, have been made available. Additionally, the Department of Education has purchased two 150 horsepower engines and a shaded school boat to be available from September for the riverine schools.

Gordon Bradford, Regional Chairman, in urging the children to take full advantage of the opportunities which have been presented, said that it is the President’s vision to see every child in school and as such, has embarked on the Five Bs programme to make this a reality.

He however, noted that while the Government is doing its best to eradicate the barriers to access to education, parents and even the students, have the responsibility of ensuring that the opportunities presented, are not squandered.

“The President is the father of the nation in that he has the interest in the people and he wants to give them the opportunity to qualify themselves. You have made this region proud…but we want parents to give a little attention to children. We, at the administrative level, we want to see value for money. We want you parents to be active in the child’s performance. The President has mandated us to provide transportation for children. Our Region is the most difficult to administrate and we have gained from our efforts,” he said.

Technical Officer at the Ministry of Social Cohesion, Shabbir Ali said that to date, 10 school buses, 9 boats and over 500 bicycles have been distributed across the country in the 10 administrative regions.