Minister of Citizenship, Mr. Winston Felix, today, received the Policy Recommendations and Guidelines for the Setup of an Electronic Visa (E-Visa) and Work Visa System, which will aid in the implementation and development of a modern visa issuance policy and system in Guyana. Work to compile the report, which was conducted by the International Organisation for Migration (IOM), came about following a request made by the Department of Citizenship to the African, Caribbean-European Union (ACP-EU) Migration Action Programme in June 2015 for technical assistance on how to improve the country’s visa processing and issuance system and immigration services.

Ambassador to the European Union (EU) in Guyana, Mr. Jernej Videtic, handed over the report to the Minister, who during brief remarks at the handing over ceremony, said that he was happy to receive the report, as it will serve as a source for correcting the many issues associated with the country’s current visa system. ”The world is changing, but the migration policy in Guyana has not changed. We have had our immigration laws and visa facilities available since we became Independent with very little changes to it. But in this changing world, which is seeing human trafficking, transnational crime and irregular migration patterns, we in Guyana are now seeking to harden the soft parts of our immigration system,” the Minister said.

Minister Felix said that Guyana currently still issues its work and visitor visas via the use of rubber stamps, which has led to instances of forgery.  “Every now and again we are encountering foreigners presenting their passports with bogus Guyana stamps… How long must we contend with a situation in which our immigration system is easily defrauded? And once we recognise fraud intervening into a legitimate system it is our duty to make sure that we protect it against fraud so that genuine travellers would understand what is available and be able to use it without fear of holding on to something that is bogus,” he said.

The Minister said that the Government is, therefore, pleased to partner with the EU and the IOM to bring meaningful change to the Guyanese immigration system. “It will serve us well that we ensure that persons entering Guyana for work in particular are properly screened, vetted and the policy is set straight for the visitor as well as the airline,” he said.  The Minister said that this is just the initial phase, and that much more work will be done in ensuring that Guyana has a modern and sustainable visa issuance and immigration system.

Ambassador Videtic said that the recommendations within the report, once adopted, will be beneficial. “Guyana’s economy will benefit from a system, which makes tourism more attractive and provides more transparency for foreign investment and a genuine need for foreign labour. Safety and security will be enhanced through a well-managed, easily traceable system, which prevents the unregulated inflow of non-citizens. It will also bring social, educational and cultural benefits and meet humanitarian objectives,” he said.

The Ambassador said that migration has become one of the biggest challenges globally, and that a political response is needed to deal with the fact that there is an increase in international migration. As such, the European Union has over the last decade made major steps toward building a comprehensive migration policy based on common political principles and solidarity, this is important internally and externally. He said that the EU migration policy is based on better organising legal migration and fostering world managed mobility, preventing and combating irregular migration and eradicating Trafficking in Persons, maximising the development impact of migration and mobility, promoting international protection and enhancing the external dimension of asylum and the respect of human rights.

IOM’s Regional Coordination Officer for the Caribbean, Mr. Robert Natiello said that the organisation is committed to the principle that regular and orderly migration must be beneficial to the migrants as well as the societies that send and receive migrants. “The process of emitting visas is an important part of ensuring the regular and orderly migration process. When we have irregular migration processes, we have seen that this opens up migrants to many vulnerable situations and they can fall into situations of human rights violations, Trafficking in Persons and smuggling of migrants. So we are pleased to be able to provide technical assistance for this type of work,” he said.

Minister within the Ministry of Public Health, Ms. Karen Cummings and Minister of Business, Mr. Dominic Gaskin were also present at the event. Minister Cummings said that there is a link between migration and morbidity. As such, she said that the Ministry of Public Health welcomes the report due to the threat of emerging and re-emerging diseases such as chikungunya and Zika. “Guyana has to guard its frontiers. We have to be alert… we want to protect our citizens and ensure that in tourism there is safety and security,” she said.

Minister Gaskin said that his Ministry looks forward to collaborations with the Department of Citizenship and other stakeholders in looking at the recommendations of the report in order to regularise the visa issuance system in Guyana, particularly with regard to business visas. “We have investors from various parts of the world and not all of those countries have visa waivers. So it is important for us to have a visa system in place that works well and today’s report shows that work has begun and there is a concrete set of recommendations that will form the basis for lasting improvements to the system going forward,” he said.

IOM Consultant, Ms Patricia Bell, compiled the report. In her remarks, she said that during the research period, she found that government policy was one, which encouraged managed migration. She added that there was a ministerial and departmental will to improve and modernise the visa system as well as dedicated and committed officers at every level of the immigration process. “Improvements within the recommendations will result in a robust, simplified and traveller friendly process,” she said.

Now that the report is completed, Minister Felix said that the Department of Citizenship will look at the recommendations, decide which are feasible and come up with a plan of action for the implementation of the E-Visa system. 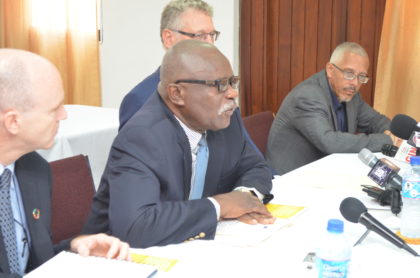 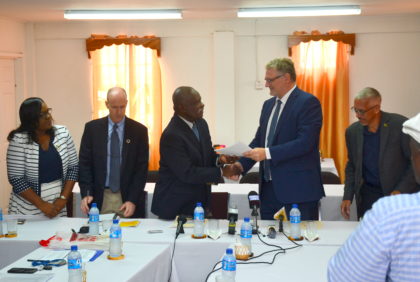 Minister of Citizenship, Mr. Winston Felix receives the Policy Recommendations and Guidelines for Setup of an Electronic Visa (E-Visa) and Work Visa System from Ambassador to the European Union (EU) in Guyana, Mr. Jernej Videtic 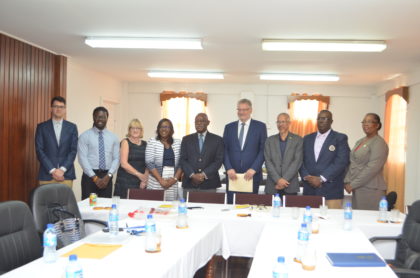