Guyana’s first Indigenous member of Parliament, Stephen Campbell now has a building dedicated to his honour.

The building which houses the Department of Citizenship has been renamed the ‘Stephen Campbell Building’. 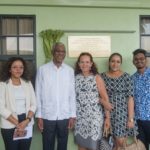 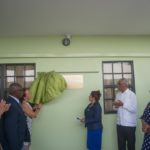 Members of the Campbell family with Ministers of Government unveiling the plaque. 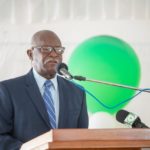 “It is fitting that this building should be dedicated to the memory of Stephen Campbell, one of Guyana’s iconic Indigenous leaders, Stephen Campbell was an ardent advocate for protecting indigenous citizenship,” the President stated.

“Campbell’s vision of citizenship embodied the concept of national integration. This he felt could be achieved only if each person is respected regardless of his/her class, ethnicity or place of residence and where everyone enjoyed opportunities for economic, political and social advancement,” the Head of State added.

Stephen Joseph Campbell was born in Moruca, a sub-district of the Barima Waini region, the northernmost part of Guyana, on December 26, 1897. He was elected onto the Legislative Council of British Guiana on September 10, 1957.

In his remarks Minister of Citizenship, Honourable Winston Felix noted some of Campbell’s outstanding achievements.

Campbell pushed for Indigenous land rights to be guaranteed in the independence constitution. He also spearheaded a historic change in bringing to the fore the vital and rightful place of the Indigenous peoples in the mainstream of life in Guyana and its future development. The path that he carved out for Guyana’s First People, plays a vital role in modern-day Guyana.

His achievements are celebrated annually in September – Indigenous Heritage month – when the Indigenous traditions and culture are showcased.