An Occupational Safety and Health (OS&H) handbook was today launched to boost employees’ safety. The handbook initiative is aimed at preventing and avoiding occupational accidents.

General Manager, DHBC, Rawlston Adams handing over a copy of the OS&H handbook to Minister of Social Protection, Volda Lawrence

The OSH handbook was prepared and launched through a collaborative effort of the Ministry of Social Protection, the ILO and the DHBC.

Minister Lawrence explained that the launch of the handbook is opportune since it would provide all stakeholders the unique opportunity of learning what OS&H entails, and what is expected of workers and management in the execution of their duties.

The Minister pointed out the importance of remaining in sync with relevant current practices and standards relating to workers’ safety and rights.

“Too often, workers lack the requisite knowledge and are totally unaware of the safety procedures that must be followed; others are reluctant or even skeptical about adhering to safety practices,” the Minister explained.

Minister Lawrence said it is envisioned that the handbook would become a source of reference for the dos and don’ts of the workplace.  “It is hoped that this document would not become a wall decoration, but an integral part of staff and management meetings.” 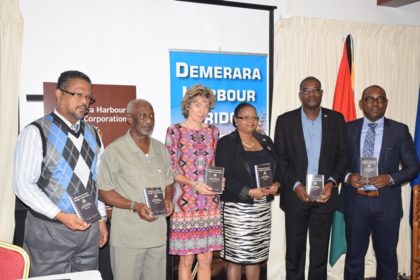 Adams, meanwhile explained that the handbook addresses two sections; one dealing with identifying the laws that govern occupational health and safety, and prohibited activities including alcohol and drug abuse and smoking.  Section two highlights building hazards and potential risks including plant and vehicle, wearing of protective equipment and stopping in front of moving vehicles among others.

“There are serious concerns of for our employees, and we want to make sure that once employees engage in those activities they do so in a safe manner,” Adams explained.

Meanwhile, Minister Scott said that the OS&H handbook is timely and will greatly benefit workers. The Minister noted that the statistics of the loss of human life and accidents in Guyana is equally frightening and discouraging as the rest of the world.

“During the year 2015, there were close to 1200 loss time accidents and more than two dozen workplace fatalities. For this year thus far, more than 500 loss time and nine fatal accidents were reported. Those situations both locally and internationally are the results of poor health and safety practices,” the Minister pointed out.

The Labour Minister further explained that the handbook is very comprehensive and that there is hardly any unspecialised area which has not been covered.  “I cannot begin to enumerate the number of areas of safety covered by this manual, but would submit that it is so comprehensive that I would repeat that it can be used as a benchmark to be followed by other employers,” the Minister said. 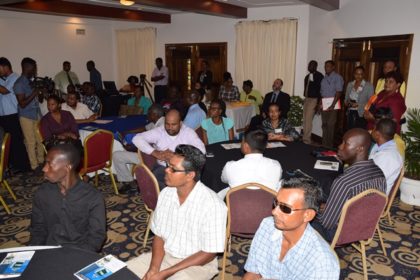 Minister Patterson commended the effort of the DHBC in launching the guidebook. The Infrastructure Minister explained that, “we have not tabulated the loss time and cost we would suffer due to workplace injuries and mishaps…as a Ministry we could do better to ensure that our workers are equipped with the requisite apparels and equipment.”

Meanwhile, Director of the Decent Work Team and Office for the Caribbean International Labour Organisation (ILO), Claudia Coenjaerts, detailed the interrelation of occupational safety and health and productivity. Coenjaerts noted that it is important to recognise that OSH is extremely connected with productivity, “if we want productivity and prosperity in our societies it is important that we look after our work place and OSH is really the guide to which we operate.”

Coenjaerts pointed out that the guidebook is a manifestation to avoid accidents and the loss of lives by accidents.

The launch is a part of the three-day consultation aimed at formulating a decent work country programme for Guyana by the Ministry of Social Protection in collaboration with ILO.  The Guyana Decent Work Country Programme consultation will conclude on September 23, 2016.