Guyanese in the diaspora turned out in their numbers on Thursday evening to receive Prime Minister, the Hon. Moses Nagamootoo, at a Coalition rally, held in Brooklyn, New York.

As he brought greetings to the ecstatic crowd, Prime Minister Nagamootoo reaffirmed that the future of Guyana lays in a coalition government. 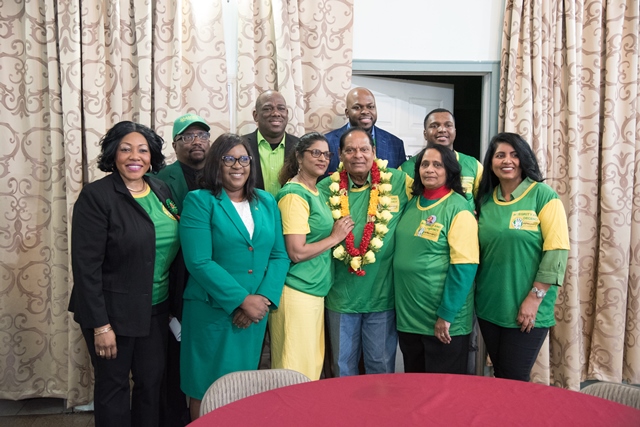 Prime Minister Moses Nagamootoo and Dr. Hon. Karen Cummings, Minister of Foreign Affairs along with supporters and organisers of the rally in New York.

Decisions about Guyana’s future, he said, should be made collectively. Adding that the current government believes strongly in integrity.

“There must be integrity in public life and you have to live with the laws you make and the laws must apply to everyone.” … “When we got into the office the first thing, we did was to introduce integrity legislation, we re-comprised the integrity commission,” Prime Minister Nagamootoo stated.

He said government ministers were also subjected to a higher standard.

“I introduced a code of conduct for ministers and those who benefitted from the public purse and set out what those codes should be, what gifts they should receive, their relationship with persons who investing into the country.”

The event was organised by prominent Coalition supporters in New York.