Guyana’s 50th Independence Anniversary exhibition, hosted by the National Trust, offers brief glimpses of Guyana’s diverse heritage. It allows for visitors to reflect on how far the country has come, and celebrate the achievements of today. It also inspires Guyanese towards creating goals for tomorrow.

The showcase at the National Trust of Guyana’s building at 94 Carmichael Street is yet another activity on the agency’s calendar to celebrate the country’s Golden Jubilee anniversary.

The exhibition which opened today, and will run until the end of the month,  celebrates five decades of Guyana’s independence through various images, artifacts, objects, models and publications.

Giving a brief overview of the exhibition, Chief Executive Officer (CEO), National Trust Nirvana Persaud, explained that the objective of the display is to showcase aspects of the country’s heritage; tangible and intangible, cultural and natural, which offer an insight into Guyana’s rich and diverse legacy. 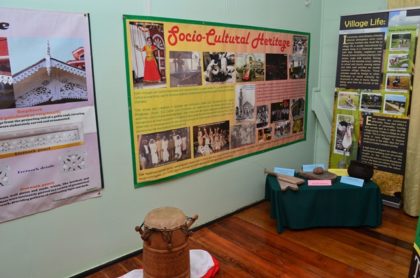 Persaud also noted that each component of the exhibition is in keeping with the overall theme of Guyana’s 50th anniversary celebration; “Reflection, Celebration and Inspiration.”

Though National Trust’s mandate is primarily to focus on the tangible aspects of heritage, particularly the monuments, Persaud said that the agency is aware of the importance of the intangible components that complete the story. She explained that it is for this reason that the agency made an effort to include aspects of the intangible components of the country’s history, to contextualise and balance the exhibition.

Speaking on all the heritage indicators that have shaped this nation, Persaud noted that “the diverse origin of the indigenous people, along with those who came to Guyana within the periods of exploration, conquest, settlement and subsequent economic development, has contributed to the shaping of Guyana’s historic landscape.”

Display explaining the development of the Guyanese Creole Language

She observed that, “…the traditional forms of dress…and daily lives of our ancestors   have moulded a unified way of life, and identified us as one people. And though we have transformed and even modernised our lifestyle, our culture nevertheless remains deeply rooted in us and visible in almost every facet of our daily life,” she observed.

Persaud also explained that the agency deliberately choose to host the exhibition at its office, to promote the work of the National Trust.

The exhibition is being supported by the Guyana Heritage Museum, the Museum of African Heritage and National Heritage. All these agencies have assisted by sharing and loaning aspects of their respective collections, to boost the display and experience of the exhibition.

The National Trust’s series of activities in commemoration of the country’s 50th Independence anniversary commenced with the launch of the agency’s newest publication titled ‘Linden Heritage Trail’ in April.

Other activities planned by the agency for the 50th celebrations include during the month of May, a week of free tours around Georgetown and a one-day free tour to the Dutch Museum. There is also an international heritage seminar planned for June.