Diversification is the answer to financial losses at GuySuCo

The need to diversify the Guyana Sugar Corporation (GuySuCo) remains on the agenda of the Corporation.

The Board of Directors and Management of the corporation presented statistical data which show the industry’s future is dependent of radical reorganisation to tackle the losses incurred by the corporation. 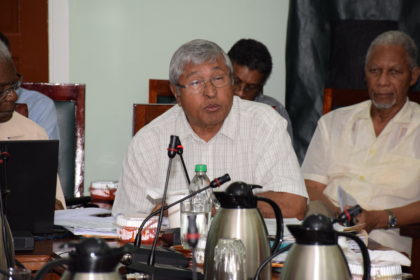 Chief Executive Officer (CEO) of GuySuCo, Errol Hanoman, said that for a number of years, sugar production and low prices on the world market have led to the industry incurring significant financial debt.

Hanoman said that, “It is our (Board and Management’s) firm view that for far too many years in GuySuCo, too few dollars have been chasing too many acres and what effectively we have been doing, is running the good estates down to keep the poor performance (estates) going and what (that) effectively means is that they are all now run down in different degrees. We have sacrificed the good performance to keep the poor performance going.”

Losses incurred by the industry are recorded at $17.5B in 2014, $18.1B in 2015 and $12.1B in 2016. The CEO said, if there is no change in the organisational structure and production remains undiversified, projected losses for 2017 stands at $13.7B. Additionally, due to prevailing sugar prices of US 19.84cents per pound, the industry will not be able to cover its overhead production cost of US 36.6 cents per pound.

Based on the data presented by the representatives of GuySuCo, ten suggestions were put forward by the Chairman of the Board for considerations in pursuit of  the corporation’s diversification.

Some of the suggestions to the government were; to divest the Skeldon Estate, diversify the Rosehall, Providence and East Demerara Estates and recruit the necessary expertise to drive the change or the re-organisation of the industry.

A Commission of Inquiry into the current state of GuySuCo was conducted in 2015 and laid in the National Assembly.  The report of the CoI recommended the privatization, incorporation and regulation of the industry under the companies Act. The COI also recommended that GuySuCo’s management focus on basic essentials to rehabilitate the fields, factories and infrastructure of corporation.