“Do not allow divisive politics to keep this region down” – PM

Prime Minister and First Vice President, Moses Nagamootoo, in remarks Saturday last told attendees at a ceremony held to launch Region Five’s Business and Tourism Magazine,  that it is important for the Regional Chairman and Councillors to stop the infighting and find solutions so that the budgetary allocations can be utilised for the benefit of those who reside there. 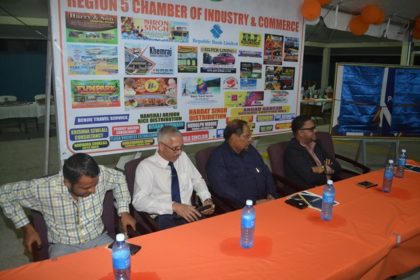 “Politics is the art of government and you could use the art to promote the development of your region but if you decided to do the converse and apply divisive politics, then your region is going to be fragmented. It would lag behind and its potential will be squandered and wasted,” the Prime Minister said.

Addressing earlier statements made by Regional Chairman, Region 5, Vickchan Ramphal,   the Prime Minister said, “I want to say the fact that you have a large capital budget and it is not utilised to its fullest, affects your potential because [WE] depend on the Regional government to spend the money that has been voted by Central Government, taxpayers money, to develop the infrastructure and to maintain social services in the region.”

The Prime Minister further said that the size of the Region augurs well for it to develop into an economic giant were there to be a unified approach to its management and development. “I just want you to imagine for a while that you are living in a region in which you can fit a number of big countries, developed countries and so you see the potentials of Region 5. What could become disheartening is that you have capacity; you have size; you have potential resources but you are not developing at your full capacity,”

In addition, Nagamootoo called on the Region’s Members of Parliament to play meaningful roles in resolving conflict within the RDC and chart a way forward for utilisation of the region’s capital budgetary allocations.

“I don’t believe that we should allow this region to be held down by divisive politics. It has three MPs.  Harry Gill is one here and so they have to be able to give guidance from the National Assembly as to what is expected of a region in relation to the utilisation of scarce resources you cannot waste; you cannot find a reason not to spend it.  It must be spent, it must be utilised every year if it is voted for in the region.”

The Region 5 Chamber of Industry and Commerce was also applauded by Prime Minister Nagamootoo for being a visionary and working diligently for the Region’s development. Acknowledging the organisation’s name change from West Berbice Chamber of Commerce to the more encompassing Region 5 Chamber of Industry and Commerce, Nagamootoo said, “That shows that the chamber itself is thinking bigger, wider; it reflects its ambition; it reflects its own potential for growth from just being West Berbice into now Mahaica-Berbice. It’s an ambition you need to be proud of; so and I am hoping that chairman Ramphal is taking note of what I am saying because this region must transcend beyond politics it must not allow politics to keep it down.”

Since the hosting of Regional and Municipal elections, the Regional Administration of Region 5, Mahaica-Berbice, has been caught up in infighting between Chairman Vickchan Ramphal and members of the Regional Democratic Council to the detriment of the execution of civil and other works which would otherwise improve the residents standard of living.