Guyana’s first Drug Treatment Court, opened its doors today. Located in the Georgetown Magistrates’ Court, it will permit easier access to resources and personnel, including stakeholders such as the police, social services, health and drug treatment providers to facilitate the efficient operation of the court.

Welcoming stakeholders at the commissioning, National Anti-Narcotics Agency Director Major General (Rt) Michael Atherly said the Drug Treatment Court was the “strongest possible evidence of the determination of all national and international stakeholder agencies, not just to fight the menace of drugs, but also to fight together to achieve progress. He described the drug problem as a serious threat to public health, safety and the wellbeing of nations, “It undermines the national security and sovereignty of states, as well their economic and social stability.” 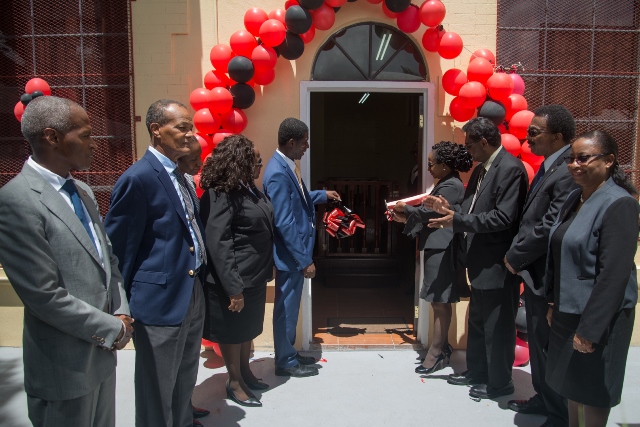 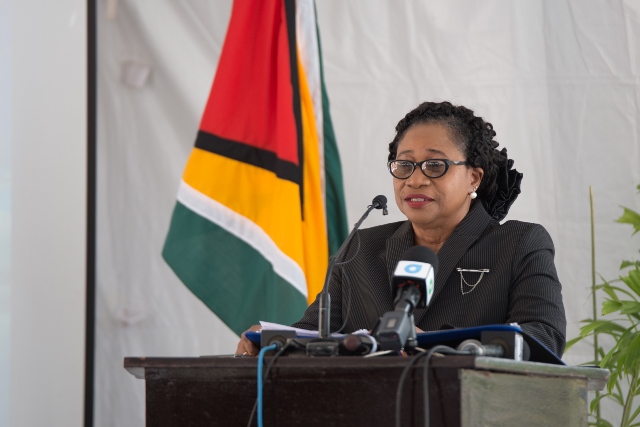 Chancellor of the Judiciary Madame Justice Yonette Cummings Edwards OR, CCH addressing stakeholders at the opening of the Drug Treatment Court

Attorney General and Minister of Legal Affairs Hon. Basil Williams SC said through the collaborative effort of the judiciary, the National Anti-Narcotics Agency, OAS and the Inter-American Drug Abuse Commission Control, justice will not only be done but be seen to be done.

“Through their collaborative efforts, we will be contributing to the effective rehabilitation and reintegration of non-violent drug offenders suffering from drug addiction. Whilst it is the government’s constitutional responsibility to protect its citizens, through initiatives for the effective reduction of crime, it is also their social responsibility to protect disadvantaged persons and create opportunities for all persons to live productive lives, free from stigma and discrimination.”

“It provides the offender with a more viable option which not only benefits him or her but for society as a whole. The court takes a social approach which promotes public safety, reducing the occurrence of drug-related offences, recidivism, substance abuse, prison overcrowding and the overall cost to the state to the state which may be diverted to other social programmes.”

The AG opined that the court will be a catalyst for other similar courts regionally. He also mentioned the drafted amendment to the Narcotic and Psychotropic Substances Control Act pending Bill, Chapter 1010, aimed at reducing overcrowding in the prisons by removing custodial sentences for possession of fewer than 30 grams of marijuana, implementing monetary fines, instead.

Pointing to the fact that records indicate that one-fifth of the prison population has been incarcerated as a result of drug possession, Public Security Minister Hon. Khemraj Ramjattan said that an alternative had to be found. “An additional reason that compelled movement away from incarceration was the high cost to maintain inmates.” The Minister further expressed the hope that the Drug Treatment Court brings the successes and rehabilitation, it is intended to do, as he thanked stakeholders for making it possible.

He was followed by OAS Representative Ambassador Jean Ricot Dormeus, who preceded OAS-CIAD Executive Secretary Ambassador Adam Namm, an executive member for the committee for the DTC’s establishment. The ambassador described October 21, 2019, as “the day of new beginnings”. He said, “We are launching the Drug Treatment Court to bring hope to many victims of drug abuse and numerous families in Guyana. We are culminating a painstaking process of regional cooperation, training and coordinating. We are giving birth to a new structure that will contribute to optimise the distribution of justice and improve peace and security in our society.”

Delivering the feature address at the commissioning ceremony – chaired by Chief Justice Roxanne George Wiltshire CCH, SC – Chancellor of the Judiciary Madame Justice Yonette Cummings-Edwards OR, CCH said the facility, which cost just under $1Million, is a step in the right direction.

The legal luminary explained that after a comprehensive assessment by a team of officials, the successful participant’s case will be disposed of by the magistrate, “The Drug Treatment Court then is seen as an intervention, rather than a sentence. It is a holistic approach by the courts, social services, by the police, defence counsel, medical services, laboratories and everyone working together, to help the offender.”

The National Drug Strategy Master Plan 2016-2020 outlines several initiatives to address the drug problem from both a public health and public security perspective. These include exploring various alternatives to incarceration, reducing sentences for various non-violent drug-related offences and the establishment of Drug Treatment Courts.