Minister in the Ministry of Public Infrastructure, Annette Ferguson has assured that the recommendations in the draft of the final report submitted by the Dutch Engineering team will be effectively used to ensure the whole situation of flooding in Georgetown will be alleviated. 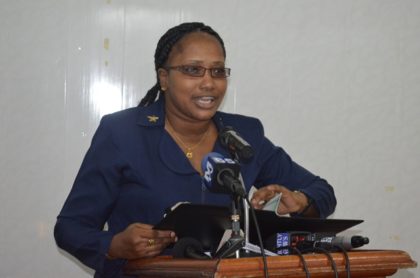 Annette Ferguson, Minister within the Ministry of Public Infrastructure, addressing stakeholders present at the handing over the final report on Project Georgetown.

The draft of the final report for Project Georgetown was presented today, in the Boardroom of the Ministry of Agriculture, Regent Street and Vlissengen Road, Georgetown by the Dutch engineering students.  The report has to be certified by the DRR Specialist in the Netherlands.

Minister Ferguson assured those present at the handing over, of government’s commitment to use the information gathered and recommendations made by the team of engineers.

“I can assure you (that) the government will not allow this report to be placed on a desk to accumulate dust… I trust that those to whom the knowledge will be imparted will see the need to develop from what you have shared in order to have this entire situation addressed,” the Minister said.

The project was conducted by a team of seven students working with local agencies for the modelling of an effective and efficient drainage system for the city of Georgetown.

The team comprising students undergoing studies which will lead to their Masters in Hydraulic Engineering spent approximately seven weeks working on the project, which was designed to help in the transition from an experience based approach to scientific management. 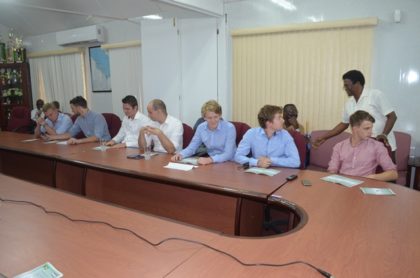 According to leader of the Dutch Engineering team, Joost Remmers, the project mainly looked at the catchment area of South Ruimveldt and at three main components, namely the local drainage system, the primary channels and Liliendaal channel, and the outflow structures and kokers next to the Demerara River.

In the first instance, a model was created based around the storage principle.  This model is used for the calculation of the theoretical delays which happen between the water inflow into the local drainage system and the outflow to the primary channels. It also shows some theoretical insight into the dynamics of the system.

Further, the analysis utilising this model allows for an assessment of what may happen under different scenarios such as the effects of neglecting to maintain the local drainage systems.

The second component of the project focused on the primary channels mainly using hydraulic modelling.

During this phase, three types of data were collected, geometric data (what is the general route like, length of structures, dimensions etc), hydraulic data which was mainly generated from analysis which was done previously on the local drainage system, and the third, about the boundary systems such as the length of time it takes to open a koker or the influence of the Liliendaal pump station on other channels.

Each of the three components of the project delivered a different result. The three types of data collected formed the basis for the development of hydraulic modelling which emphasised the current situation of the South Ruimveldt channel.

The main goal of the model is to provide the ability to compare the different effects of various situations in the primary drainage channels in the South Ruimveldt area.

The third component dealt with the examination of the structures along the Demerara River and their importance in the entire drainage system.

The main focus of this component was the ability to assess the effects and quantify certain effects of something going wrong, an assessment of which element has the highest probability of failure and therefore what should be prioritised for maintenance before something goes wrong. 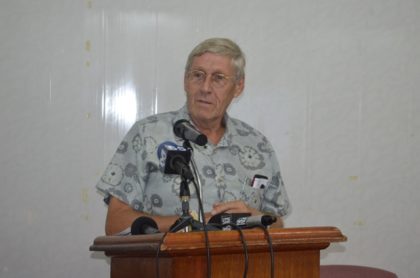 In brief remarks, the Honorary Dutch Consulate in Guyana, Ben ter Welle congratulated the student engineers for doing a good job and said the rest was dependent on the allocation of funds for the implementation of the recommendations.

“Students you did a nice job to help the Guyanese, it was the aim of the Kingdom of Delft. I was always told that the knowledge is here, but your contributions will help to increase the knowledge and now that you have shown where the knowledge can be, increases the major issue, is the money, so it’s now up to the Minister of Finance and the Ministry of Public Infrastructure. I can say that living in Georgetown for the last 20 years, the cleaning of all the waterways has helped me substantially in Queenstown. I made an infrastructure which is no longer needed because the water level even with flooding is much lower,” the Honorary Consulate said.

Meanwhile Maxwell Jackson, Head of Department of the Faculty of Technology, Department of Civil Engineering of the University of Guyana said that the institution is proud to be associated with the project and will endeavour to ensure its continuity.

“They did the work very well…. The University of Guyana is committed to continue this process… we were able to furnish some data towards the completion of this project. The University of Guyana being the primary academic institution will continue to do verification of the model … some of our students will be examining the outfall in the Kitty area starting in the new academic year… your effort will not be in vain,” Jackson noted.

Deputy Mayor of Georgetown, Sherod Duncan said he is pleased with the collaborative effort and is anxiously awaiting the opportunity to read the final report. 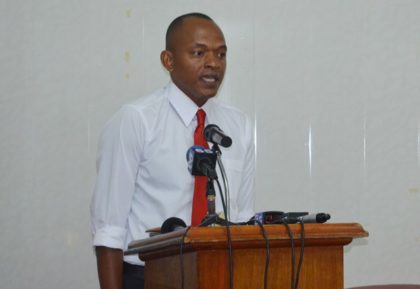 “I’m impressed by your work. The project has given me a great opportunity to learn about the interconnection of the city’s waterways. It would be a tremendous blessing to the people of South Ruimveldt. I’m really hopeful that the local government and central government follow through on your recommendations,” Duncan noted.

Government agencies which worked along with the team, which is here as a follow-up on a visit made in 2015 by the Dutch Disaster Risk Management Team are the Ministry of Agriculture, National Drainage and Irrigation Authority (NDIA), Mayor and City Council of Georgetown (M&CC), University of Guyana (UG), the National Task Force, Ministry of Public Infrastructure and the Civil Defence Commission (CDC).

At the launch of the project in July, Minister of Public Infrastructure, David Patterson had said, “Guyana’s drainage system has been operating primarily on historic knowledge from the operators and while we value the experience of our staff we believe that modernisation is vital in order for us to improve our drainage system.”