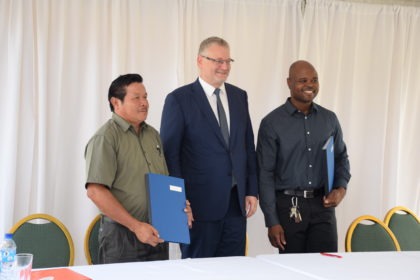 The 36 months project plans to raise awareness of the protective services available in communities along with providing some of those service; particularly counseling, for persons experiencing difficult situations.

“We believe that many people are suffering in silence and do not know where to turn for help,” Nicholson said.

The project will be implemented in Regions Two, Three, Four, Five, Six and Ten to ensure that services are closest  to the most vulnerable populated communities, Nicholson said.

The organisations will be supported with capacity building to strengthen services that they currently offer and to include some more degrees of protective services, Nicholson explained. “We want to nip it in the bud,” he said.

The other project, ‘Promotion and Protection of Indigenous People’s Rights in Guyana’   aims to correct discrimination against indigenous 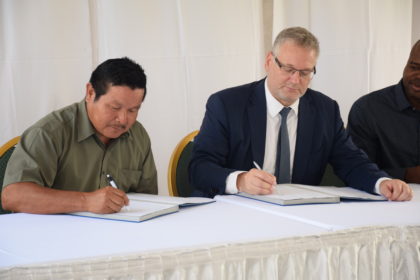 peoples and to secure and protect their human rights. The agreement was signed with the Amerindian Peoples Association which will team up with the Forest People’s Programme (FFP) to implement the project valued at $94.5M.

President of the APA, Tashao Mario Hastings, said that he was elated to have the opportunity while explaining that it will aid in fighting for Amerindian rights. “We are positive that a project such as this will enable an inclusive process to ensure the deficient legislation which impedes or negates our rights will be corrected,” Hastings said.

Head of the EU delegation to Guyana, Ambassador Jernej Videtic said the grants represent unprecedented support for civil society in Guyana and shows the importance the European Union attaches to civil society and their role in democracy and human rights.

Videtic explained that there is a strong partnership between the EU and civil society to support vulnerable groups, gender equality, equal opportunities, and fight against any kind of discrimination based on language, ethnicity, sexual orientation, gender or religion.

“I am looking forward to the implementation of these projects very much. I hope they will create a number of activities which will last, even and particularly, beyond the duration of the projects,” Ambassador Videtic said.