Guyana also received EU funding to the tune of GYD$2B for sea and river defences. This funding was received by Minister of Finance, Winston Jordan, on behalf of the Government of Guyana.

During the ceremony at the Georgetown Marriott, Minister Patterson thanked the EU for its support and said that the completed manual was the realisation of a long process. He added that the manual is the “intended blueprint for how we are going to proceed onwards.”

He further deemed the GYD$2B disbursement as “extremely heartening” and said that the administration had inherited a situation which made it unable to access the EU funds immediately. 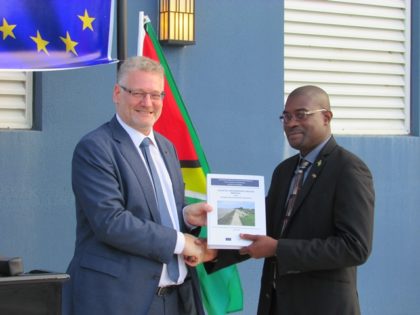 “So, while this disbursement represents a great payment towards our coastal zone protection, it also represents a stride forward for this administration,” he said.

Additionally, the Government of Guyana has made significant progress in developing capacity for protecting itself from rising sea levels, through means such as the formulation of an Integrated Coastal Zone Management and the drafting of a new Sector Policy and Strategy.

In his remarks, Ambassador Videtič said that sea and river defences have been an important feature of the relationship between Guyana and the EU. Noting that Guyana is “particularly vulnerable to rising sea levels and coast erosion” of both natural and manmade sea defences, the Ambassador emphasised that Guyana needed to develop its capacities to adapt to its vulnerabilities. The aim, he added, was to limit the negative impacts of rising sea levels and climate change.

“I am pleased to note that over the past two years, Guyana has shown marked progress in developing capacity for protecting itself from rising sea levels,” Ambassador Videtič said. He continued, “A newly developed Coastal Engineering Design Manual sets the standards for designing sea and river defences specific to Guyana’s conditions.”

The handing over ceremony comes almost seven months after the Ministry and the EU partnered to host a two-day workshop to finalise the document.

On December 8, 2015, staff from MPI’s Sea and River Defence Department gathered to offer their input on the manual, with the goal of improving Guyana’s sea defence system.

The manual aims to provide appropriate and practical guidance for applications of methods and techniques in regards to the design and implementation of coastal engineering projects in Guyana. These projects concern new constructions or repair and rehabilitation of existing ones; the prevention of the erosion of oceanic, estuarine, and recessed coasts; coastal flooding; and the heavy damage from wave attacks to valuable coastal commercial, urban, and tourist communities of Guyana.

The manual was put together by a team of consultants who would have spent time in Guyana interacting with a number of agencies, including the Ministry of Agriculture; the Environmental Protection Agency; the Transport and Harbours Department; and the Central Housing and Planning Authority.

Focus areas in the document include integrated planning for sea and river defence works in Guyana; the physical site conditions and data collection issues; and natural flood protection systems along Guyana’s oceanic coast and river banks and their relevance to the shore zone management process.

Under the 10th European Development Fund (EDF) framework from 2007 to 2013, EU–Guyana cooperation has focused on a number of areas, including sea defences.

The Government of Guyana and the EU are currently developing a subsequent Sea and River Defence programme under the 11th European Development Fund. Under the 11th EDF, support to the sector will be more than doubled to approximately GYD$7B.