ExxonMobil to invest US$5B in preparation for oil production

Staff ReporterMarch 2, 2017
GINA, GUYANA, Thursday, March 2, 2017
The Ministry of Natural Resources today, facilitated a briefing on the developments of its oil production to members of the local media.
ExxonMobil Country Manager, Jeff Simon, in his presentation explained the process that the company and its partners will undertake towards a projected 2020 production start.

The briefing is part of the Ministry’s national outreach programme to provide information on Guyana’s progress in the new sector. 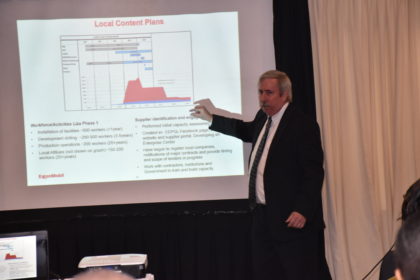 Simon explained that its local affiliate Esso Exploration and Production Guyana Limited (EEPGL) had applied for a production licence in December and has contracted a Floating Production Storage and Offloading (FPSO) from SMB Offshore, a large company that specialises in tanker and FPSO construction.
The FPSO is a specialised vessel that will extract the oil from under the sea and store it until it is later moved to a refinery or sold on the world market. The FPSO will have an oil production
capacity of 100,000 barrels per day.
Simon explained that the vessel will separate the gas and water from the oil. While the oil will be stored on board,  the gas and water will be re-injected into the reservoir. Exxon is expected to drill about 17 wells to extract the oil which is said to be equivalent    to between 0.8 to 1.4 billion barrels of oil.
The oil company will be investing US$5B in preparation for oil production by 2020.  This is mostly for the drilling, manufacturing and procurement of the materials required for the surf and the FPSO.
“The way we install a lot of the stuff on sea floor… is with some specialised equipment. There is not a lot of these kinds of vessels around the world,” Simon explained.

He added that the performance of the Liza wells has “has given us some additional confidence… to go forward in the development.” 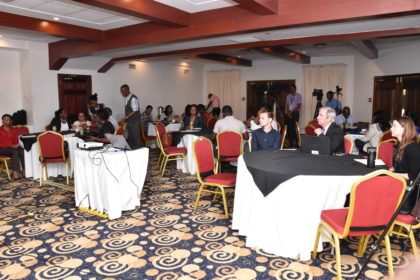 ExxonMobil acquired its exploration permits since 1999, but it wasn’t until 2014 that the company began drilling explorations.
Simon said the company actually lost its partner back then which was another major oil company, because it was too risky.
ExxonMobil soon partnered with Hess Corp and Nexen but Simon explained that the exploration was still “a risky play”.  The oil companies had a one in five chance of success, but that was struck in 2016.
“2015 was Liza 1, but it wasn’t until Liza 2 was drilled in 2016 that we actually had enough confidence in the accumulation to say that yes we have something to go forward in the development,” Simon explained.
The oil that is being primed for production is in the Liza field which is within the 6.6 million acres Stabroek Block located offshore Guyana.
The country manager cautioned however, that the offshore production will not require a large workforce.  “I think the key things here are that that facility out there and all that equipment is really high-tech, highly instrumented and it is run basically with 60 to 80 people out on that ship and that’s two ships of people out there, so it’s not a people intensive operation for the actual oil production and operations,” Simon explained.
However Simon assured Exxon will be utilising local content to supply the offshore production.  “A lot of the supply of those equipment and materials will be coming from Georgetown: food, fuel and other materials,” Simon said.
To date, Exxon has invested a total of US$800M in exploring the Stabroek Block offshore Guyana.
By: Tiffny Rhodius