Minister Norton noted that the courtesy call came at a very appropriate time when Guyana is performing well in football. 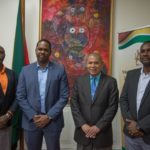 Minister George Norton in discussion with the football executives.

“We have been doing well in football, both at the male and female level and the junior level. I’m impressed with the progress, particularly because we are now involving the hinterland players and I think we have a lot of potential there.”

The Minister noted that the synthetic tracks in Regions 10 and 6 both will provide facilities to play football and hopefully FIFA will give the approval for international games to be played in these areas.

The discussions focused on areas of mutual interest in the sport of football.

In his comments to DPI after the meeting, FIFA’s regional representative Marlon Glean lauded the good relationship between government and the local football governing body. Glean said based on his observations the hard work of the GFF is paying off.

“President Ford and his team have been doing excellent work and we see it all culminating with the appearance of the Guyana National Team at the recently concluded Gold Cup. Additionally, the Under-20 and Under-17 girls has qualified for the second round of CONCACAF.  This is something that’s never been done before.”

He also commended the GFF’s initiative to have an Under-8 football tournament since it sparks the interest of players at a young age.