Islands in the Caribbean that were hit by the most powerful hurricane ever recorded over the Atlantic Ocean are still struggling to rebuild their nations, as fifty-five Guyanese have returned home.

The Government of Guyana in collaboration with local airlines, business entities, and the Civil Defense Commission (CDC) have been working tirelessly to aid the hurricane-stricken territories of Tortola, St Maarten, Antigua and Barbuda, and Dominica. 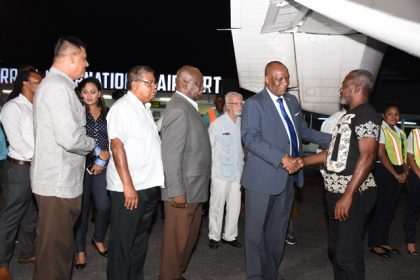 The first evacuees, nine Guyanese nationals, returned on Sunday, October 8, from Dominica. Ten others came the following Monday evening from Tortola, then on Tuesday, October 10, twelve more nationals returned from St Maarten. An additional 13 arrived from St. Maarten on October 11, and on Thursday, October 12, eleven more evacuees mostly children arrived along with the body of Derek Ragnauth who died when Hurricane Irma hit the island of Tortola.

The flights were provided by Trans Guyana Airways as well as Jags Aviation Incorporated respectively.

Minister of State Joseph Harmon declared, “that anywhere Guyanese are, anything befalls them; once it is in the power of the state to do something for them, we will extend that welcoming arm.”

Flights will be dispatched for the entire week (Oct 8 – 14) by local airlines, to evacuate Guyanese in the islands who wish to return and rebuild their lives here. According to a report, there are some 7,000 Guyanese domiciled in St Maarten, while in Tortola the population stands around 1,500.

The Government of Guyana has contributed a total US$100,000, hosted a telethon to raise funds, and has been sending containers through CDC to the Caribbean Disaster Emergency Management Agency (CDEMA). 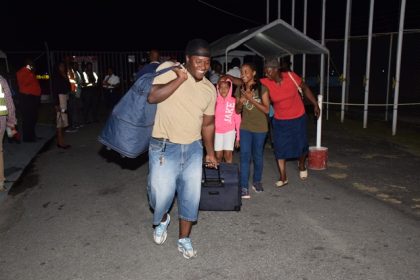 Colonel (retired) Chabilall Ramsarup, Director General of the Civil Defence Commission told Info Hub that some territories are not part of the CDEMA body, hence, flights will take supplies directly to those nations.

Eleven containers have been shipped to the CDEMA body with relief supplies. An additional ten containers are set to sail on Thursday, October 12 – six will be dispatched to Dominica, and four to Antigua and Barbuda. Once delivered, the items will be collected by the individual Disaster Response agencies for each country who will then distribute to persons in need. The CDC is currently packing two containers with housing materials, to aid in the rebuilding of the affected nations.

The Caribbean islands sustained two back to back hurricanes. On September 6, Hurricane Irma, with wind speeds of 180mph (290kph), hit the islands devastating homes and lives and the island at large. Then, not quite 24 hours later, was followed by Hurricane Maria. At least 33 people have been confirmed killed in the Caribbean thus far.

There have been 15 tropical storms, 10 hurricanes and five major hurricanes for 2017 in the Atlantic season.

The Government of Guyana remains committed to aiding regions affected by natural disasters with funding and relief items.

Randy Ragnaught resident of Tortola being embraced by relatives.

Guyanese children that were residing in Tortola greeted by a relative.