The National Integrated Solid Waste Management Strategy 2017-2030 was subjected to a final round of consultation with the general public, aimed at ensuring it fully reflects their input and advice. 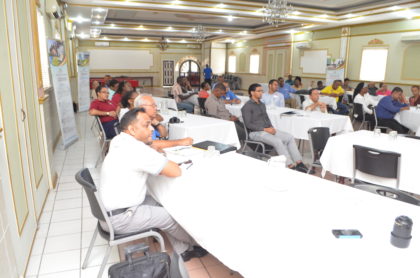 The event held at the Regency Suites today, was aimed at ensuring that the contributions and recommendations of key stakeholders in the capital city were received, and taken into account in the production of the final document.

Gilkes explained that preparation has been underway for almost two years for the strategy, and it is now reaching its final stages. He said that in 2014, the then Ministry of Local Government and Regional Development recognised the need to develop a strategy for the implementation of an integrated solid waste management programme in Guyana.

The ministry, through the Georgetown Solid Waste Management, and with assistance from the Inter-American Development Bank (IDB) developed a draft strategy, Gilkes said.

However, in order for the strategy to be finalised, it was felt that nationwide consultations were necessary, so that the comments and concerns of the public could be included in the final document, Gilkes explained.

To assist the Ministry of Communities in rolling-out the consultations, a consultant, Samuel Wright was appointed. The public consultations were launched on August 26, 2016, and to date, 26 consultations have been completed in all 10 regions.

Gilkes explained that while consultations on the strategy were being done, the Ministry of Communities was moving forward with several projects aimed at arresting the solid waste situation.

Head of the Sanitation Management Unit at the Ministry of Communities, Gordon Gilkes at the final consultation on the National Integrated Solid Waste Management Strategy 2017-2030

public awareness and community participation. Projects under the three areas comprise, the upgrading of the Haags Bosch Sanitary Landfill Site, the identification of suitable sites within each region for the construction of sanitary landfills, and the upgrading of dumpsites and improving the operations of these sites in the region, Gilkes said.

Government’s commitment to moving forward with solid waste management was also captured in the 2017 Budget, Gilkes noted. He pointed to the Finance Minister’s Budget announcement of government’s several incentives for improving waste management activities including tax exemptions for investment in, and construction of waste disposal facilities.

The Bill seeks to harmonise all the legislations, under the different agencies that address solid waste management locally. The Bill also covers such issues as the establishment of a National Solid Waste Authority, and addresses solid waste planning, licencing and operating, garbage collection, offences, and penalties.

Meanwhile, Wright reporting on the feedback from the consultations explained that overall, not many of the participants read the strategy, as such, time had to spend introducing ideas, discussing them and then introducing the strategy.

However, there was a general acceptance of the strategy, Wright said.  Despite being welcomed, expectations were low. Wright said that many of the participants do not expect that the strategy would amount to anything much.

The National Integrated Solid Waste Management Strategy 2017-2030 aims to provide the roadmap by which the country can reduce and better manage its waste.

The Strategy sets out six key goals and 44 strategic actions, which identify the government expectations of waste management at the end of the strategic period, and into the future.