August 24 – Finance Minister Winston Jordan and a team from his Ministry on Thursday toured the operations of Demerara Distillers Limited (DDL) at Diamond, during which he held wide ranging discussions on initiatives to help spur local manufacturing including expansion of the company’s manufacturing operations.

To this end, Minister Jordan reiterated the government’s committment to enhanced collaboration with the private sector to ensure an enabling environment that would facilitate the success not only of DDL’s development program but of private sector manufacturing initiatives in general. 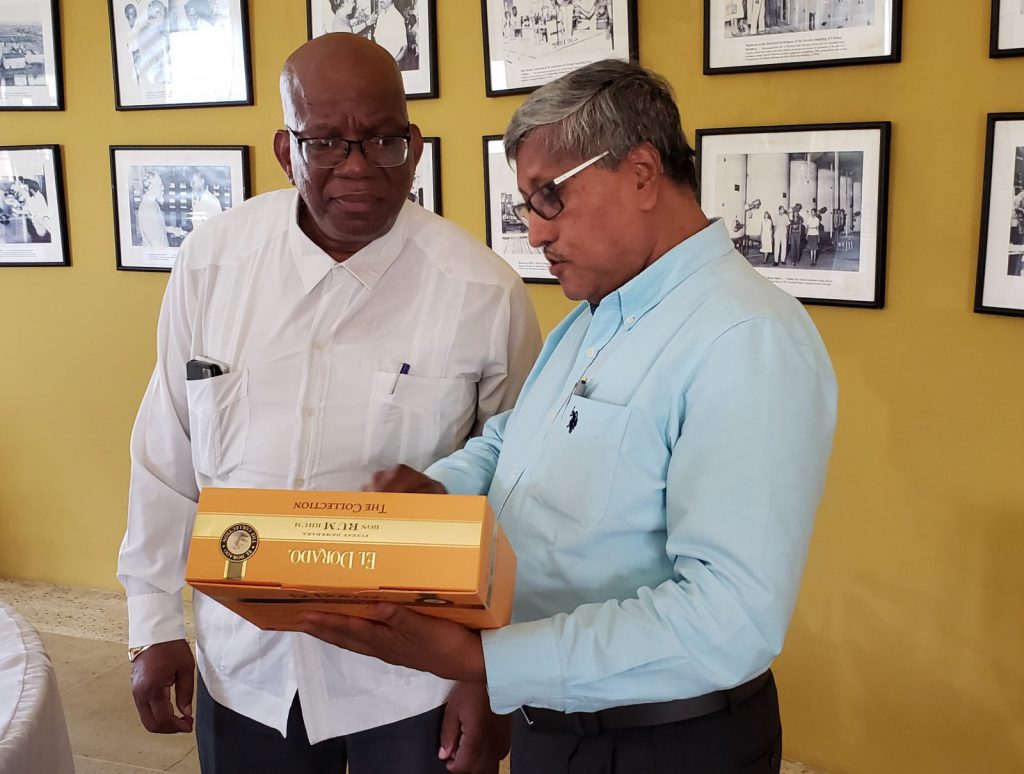 The Finance Minister pointed to the need for increased local manufacturing that utilises local produce and raw material so that small farmers and other suppliers who meet the required quality standards can be assured of guaranteed markets for their supplies.

DDL’s Executive Chairman, Komal Samaroo, briefed the Minister on the Company’s current and planned projects which include the expansion of the its packaging plant to facilitate the introduction of a variety of new products; the relocation of its Topco juice plant; the opening of its new 45,000 square foot warehouse in late October that will serve as the new headquarters of Distribution Services Limited (DSL) and the introduction of a solar farm to meet the energy needs of the company.

Minister Jordan also had an on-the-spot look at the proposed new land use program for the area which was approved by Cabinet last week following discussions between Ministry of Public Infrastructure and DDL.

During a working lunch at the company’s Heritage Center, the teams discussed the current situation regarding the supply of molasses; the company’s ongoing efforts to increase exports of its premium branded rum on the international market; the intensification of its diversification program; measures that would enhance the competitiveness of local products seeking export markets; and the training of required skills in science and technology to meet the future demands of the manufacturing sector.

Minister Jordan also pointed to the need for DDL to widen the range of fruit juices it offers to include more locally grown fruits and even vegetables. As a result, it was agreed that one area of collaboration between the government and DDL should be the mobilization of farmers by the Ministry of Agriculture to grow and supply fruits and vegetables which would meet the required standards for processing, packaging and sale on the local and international markets.

Samaroo informed Minister Jordan that DDL last week held discussions with Agriculture Minister Noel Holder, and a program of action is to be developed to move this process forward and included that DDL also met with Vice Chancellor of the University of Guyana, Professor Ivelaw Griffith to discuss DDL’s support for a food technology laboratory at UG.