Fire prevention to be boosted in 2018 – following completion of three fire stations.

Fire capability is expected to be boosted in Regions Four, Eight and Nine with the completion of three fire stations in the first quarter of 2018. 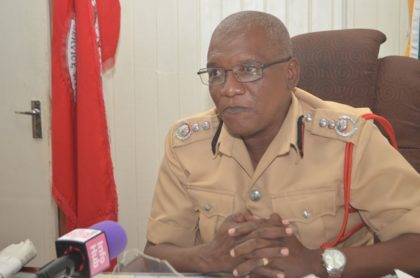 According to Fire Chief, Marlon Gentle, the construction of the fire station in Lethem, Region Nine is ninety percent complete, with external works and accessorising to be done. In Region Eight, the Mahdia Fire Station is approximately thirty percent completed.

Gentle noted that while construction of the fire station in Region Four, Melanie Damishana started in 2016, it is expected to be fully up and running in April 2018. Currently Campbellville Fire Station and the Mahaica Fire Station are the only facilities which cater to fire calls on the East Coast Corridor.

The Fire Chief highlighted that in July 2017, a contract was signed for the construction of the Mabaruma Fire Station, however the project will now be catered for in the 2018 budget.

“For the interior location we are using one model, a standard model…they will have one unique look…these areas will be covered by both our small regular fire service and be supported by the auxiliary units in those areas…meaning the members of the community. They will be given a chance to become reserved fire officers”, he explained.

With aims to boost fire prevention around the country, the Fire Chief said the service is hoping to construct fire stations in newly erected housing schemes.

“We are working with the Ministry of Housing (Central Housing and Planning Authority) and also the NDCs, looking at these areas that are being developed and quite naturally we will have to look at some intervention in terms of fire prevention in those areas as they develop”, Gentle disclosed.

He explained that efforts are also being made to construct another fire station in Region Two to support the ones presently at Anna Regina, Supenaam and Charity.

The Fire Chief is confident that with the establishment of the new stations in the areas listed, will see an improvement in response time to fire calls.

In an earlier interview, the Fire Chief had revealed there has been a considerable decline in building fires as compared to 2016 and a thirty percent decrease in fire calls for this year.