A group of women from the United Kingdom (UK) and Ireland has completed the first kayaking expedition along the entire Essequibo River.

The three-woman team was accompanied by local Indigenous tour guides and Toshao from the Wai-Wai tribe. The expedition entailed visits to the Indigenous communities of Konashen, Fairview, Apoteri, and Iwokrama. 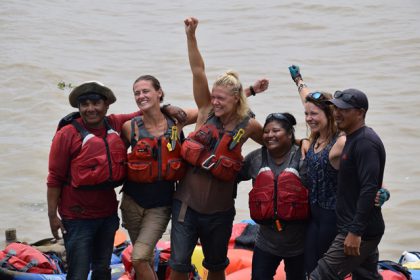 The excited explorers at the end of the rigorous expedition.

Expedition leader, Laura Bingham told the Department of Public Information (DPI) that “I had the idea in England, my husband filmed a show here a few years back and he absolutely adored Guyana and the rainforest and the wildlife. He was telling me about Guyana and I sort of just fell in love with the idea of it and then I thought, I want to paddle the Essequibo.”

This was the first expedition to kayak from the source to the mouth of the Essequibo River. It focused largely on community tourism and Guyana’s waterways.

Ness Knight, another member of the team remarked: “We’ve been going through the most incredible wilderness.” 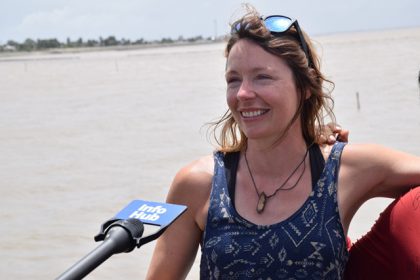 Knight said she has thoroughly enjoyed her journey through Guyana and it has really opened her eyes to the impact humans have on the environment. She particularly enjoyed “Just [the] open jungle and seeing the most fantastic wildlife also learning a lot about the conservation efforts that have been going around the country.”

Pip Stewart, who was full of vigour and energy at the end of the expedition says she definitely wants to return to Guyana.

“So, coming here, arriving here, it’s just brilliant to finish and as [the Toshao] was saying it’s been such a collaborative effort and we couldn’t have done it without the Wai-Wai and I’m just so grateful to the people of Guyana because they’ve opened up their hearts, their houses, we’ve had such incredible hospitality,” Stewart added.

The Essequibo River is the largest river in Guyana which rises in the Acarai Mountains near the Brazil-Guyana border and empties into the Atlantic River. The river runs through the country’s pristine forests and ecoregion and contains many rapids and waterfalls and a variety of flora and fauna native only to Guyana.