Georgetown, Guyana – (September 11, 2017) First Lady, Sandra Granger, this morning, declared open the 18th Self-Reliance and Success in Business Workshop, which is the first of its kind for residents of  Georgetown and its environs. Twenty-five stakeholders, who hail from communities including North Georgetown, Alberttown, Sophia, Kitty North and Campbellville, assembled at the National Congress of Women’s Headquarters at Public Road, Kitty for the opening of the five-day workshop, which aims to empower them with the skills needed to manage and advance their own enterprises. 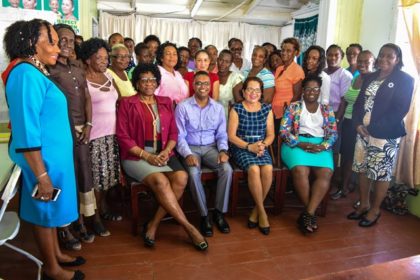 The First Lady commended the participants for capitalising on the opportunity to learn. “Once you have completed this workshop and received that certificate, you can go to the Small Business [Bureau] of the Ministry of Business or any micro-finance organisation, produce that certificate, and they [will] accept that you know how to run a business,” Mrs. Granger said. She then encouraged them to, “learn all the different aspects [of business]”.

Secretary of the People’s National Congress Reform (PNCR), Georgetown District, Ms. Shondel Hope, expressed gratitude to the First Lady, who brought, “one of her many initiatives aimed at women’s empowerment to our women in Georgetown”.  Ms. Hope noted that this programme helps to advance President David Granger’s efforts to promote enterprise in Guyana’s economy.

Meanwhile, Facilitator from Interweave Solutions (Guyana) International, Mr. Sanjay Pooran, said that the workshop is three-fold in its intent. It aims to build the participant’s business acumen, while equipping them with the skills to improve their families and contribute to the enhancement of their communities. 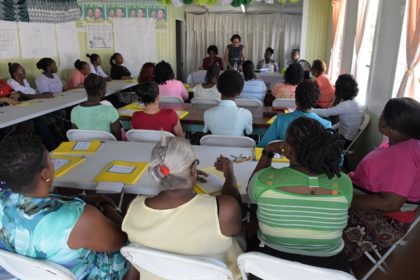 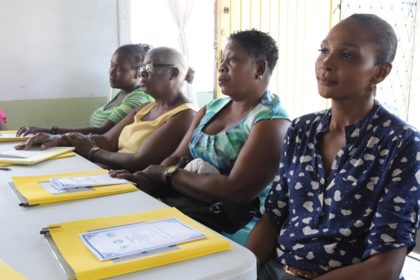 Participants listen intently to the First Lady, Mrs. Sandra Granger’s as she encourages them to utilise the opportunity to become empowered at the 18h Self Reliance and Success in Business workshop.