Georgetown, Guyana – (February 17, 2017) First Lady, Mrs. Sandra Granger, today, hosted 43 Nursery One pupils from School of the Nations at State House. The students were accompanied by Ms. Anne Thompson, Supervisor of the Nursery Division, three other teachers and six of parents of students who participated in the tour.

First Lady, Mrs. Sandra Granger and a Nursery One student of School of the Nations 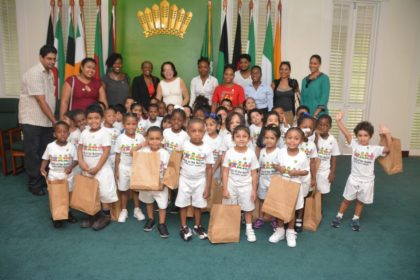 First Lady, Mrs. Sandra Granger (back row, centre), Nursery One, School of the Nations pupils, teachers and parents in the Credentials area of State House. The students marvelled at the many flags displayed and at the many ‘big cats’ in photographs mounted on the wall.

The Nursery One, School of the Nations pupils mill about the drawing room at State House even as the First Lady, their teachers and parents affix pins to their collars. 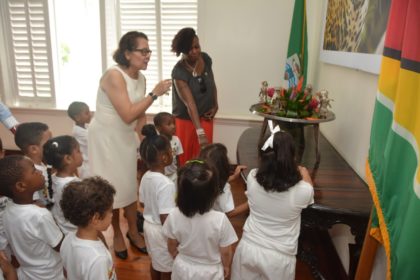 Nursery One, School of the Nations pupils pay keen attention to First Lady, Mrs. Sandra Granger as she explains the history of the Independence brass souvenir to the children. The children were quick to point out that the brass jaguars featured in the memento were similar to the one in the photograph on the wall, which prompted Mrs. Granger to explain that the jaguar is Guyana’s national animal and one of several ‘big cats’ found in Guyana and within the Guiana Shield.