First Lady, HE Arya Ali determined to serve her country

First Lady, Her Excellency, Arya Ali, in her first message to the people of Guyana, says she is very proud and privileged to serve as First Lady.

In a message that was aired by media outlet Newsroom, the First Lady said she is determined to serve in the best way possible alongside her husband His Excellency, Mohamed Irfaan Ali, Guyana’s 9th Executive President.

The First Lady revealed that she will work to erase some of the social and cultural inequalities that exist and celebrate the true beauty and diversity of Guyana.

“You will see me in your towns, villages and your homes. I want to hear from you; I want us to talk about your dreams no matter how big or small and let us work together as individuals, as communities and as a country. [Together] we can build this nation and love each other as we do so.”

The First Lady shared that her husband is very determined to achieve the goals he and his team has set for the nation.

“I can promise you that he will work very hard every day to secure a bright future for all of us because all of us belong to this one Guyana.”

She also expressed confidence that President Ali will make a “Phenomenal Leader”. 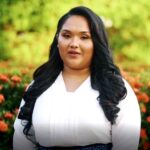 First Lady, Her Excellency, Arya Ali during her televised message to the nation. 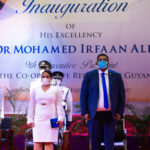 The 9th Executive President of the Cooperative Republic of Guyana, His Excellency, Mohamed Irfaan Ali and First Lady, Her Excellency, Arya Ali at the inauguration ceremony at the National Cultural Centre (NCC).

Introducing herself to the nation, First Lady Ali disclosed that she grew up in the villages of Lusignan and Ogle on the East Coast of Demerara (ECD).

“My father, Kishore, owned a lumberyard and my mother, Parvattie, worked as a cook, at the tender age of nine I lost my dad,” she revealed.

First Lady Ali shared that her mother, left as a single parent, worked hard to ensure the necessities were provided for her children.

She attended the Sacred Heart Primary School then St. Joseph High School and later pursued a Degree in Economics at the University of Guyana and a Post Graduate Diploma in Developmental Studies.

The First Lady is currently pursuing an International Masters in Business Administration at the University of the West Indies. Until recently, she was employed with the Guyana Revenue Authority (GRA).

The First Lady recalled she met her husband in 2015 and was won over by his “charisma and charm” and their marriage two years later produced a son.

She noted that very soon she will reveal more of her plans to shape her role and her office as the country’s First Lady.