New Amsterdam, Guyana – (November 7, 2017) First Lady, Mrs. Sandra Granger, on Saturday, encouraged children gathered on the lawns of State House, New Amsterdam, East Berbice-Corentyne (Region Six) to stay in school and to pursue every opportunity to learn in order to fulfil their maximum potential. The First Lady delivered these remarks in her feature address at the Annual Literacy Extravaganza for children, which was hosted by the Gordon family and friends. At the same time, Mrs. Granger again cautioned citizens against falling prey to a scholarship scam in which fraudsters have been duping persons out of large sums of money to obtain scholarships and visas in her name. The First Lady reiterated that no such scholarship fund exists and advised the public to report attempts to swindle them to the police. 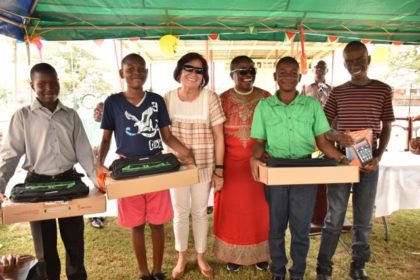 First Lady, Mrs. Sandra Granger (centre) and four boys from Berbice, three of whom were presented with laptop computers, and the fourth an Ipad for their stellar achievements at the National Grade Six Assessment. From left to right are Masters Jared Dainty, Yohance Bovell, Justin Garrett and Keiron Samuels. The laptops were donated by the Ministry of Public Telecommunications. Ms. Marva Gordon is also pictured beside the First Lady.

The First Lady expressed disappointment that people would use such a critical need for the future of the nation’s young to rob parents of their hard-earned money.  She noted that providing equal access to education is one of the most important goals of her husband, President David Granger’s administration and reiterated his mantra that Guyana must aim to become an “education nation” in order to compete in this dynamic world. The first step towards achieving this goal, she told the children, is to ensure that they are literate as literacy is the foundation upon which they will learn all other subjects.

At the same, she encouraged the children to have fun while they are learning. She then admonished parents and caregivers to start engaging babies in pre-literacy skills. “Our children… need to grow and be nurtured in an environment, which supports pre-reading and cognitive skills. These prepare you to grow with confidence and absorb as much knowledge as you can at home, at school, in church, mosque or temple and just going about in your communities,” Mrs. Granger said.

Even as Government continues to work to increase access to Information and Communications Technology (ICT) at the community level and for long people, Co-ordinator of the Child Literacy programme in Berbice, Ms. Simone Dainty cautioned the children to be on the alert for cyberbullies. “When you get on your computers and cell phones, you need to be mindful of your activities there. We have a lot of cybercrimes… We have people, who are hacking into other people’s profiles… and other cybercrimes like pornography. So you need to be careful of who befriends you on Facebook and those friendships, which you accept… and be careful of websites advising you on how to commit suicide… I am advising you even though we are promoting literacy in a digital world we are advising you to use them in a correct way,” she said.

In addition, Mr. Marcus Gordon, who spoke on behalf of his family, encouraged the children to pursue knowledge as it is “the main currency of survival”. 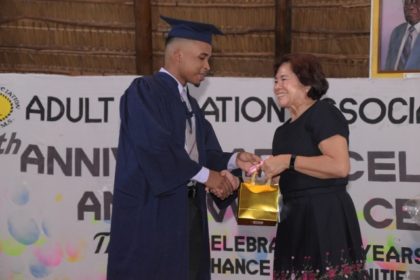 Later on Saturday evening, at the at the 60th Anniversary Graduation and Award Ceremony of the Adult Education Association of Guyana, the First Lady encouraged the 114 graduates to build on their achievements.

“I hope [that] you will recognise that this is but the first step towards your education and empowerment, and that you will need to add to, and upgrade your skills so that you can survive and thrive in whatever field of work [that] you choose,” she said, in her feature address at the ceremony, which was held at the Umana Yana, Kingston, Georgetown.

Twenty-seven students graduated from the Caribbean Certificate of Secondary Level Competence (CCSLC) programme and eighty-seven graduated from the Women’s Outreach Skills Training Programme (WOP). Participants in the WOP received training in six disciplines: Child Care Management, Care of the Elderly, Food Preparation and Service, Cake and Pastry Making, Quick Breads and Yeast Dough Making and Cosmetology.  Executive Director of the AEA, Ms. Patricia David, M.S., said that since its establishment in April 1957, the Association has offered a roster of programmes aimed at realising its vision to provide second chance educational opportunities to reduce illiteracy and to empower persons to become productive members of society.

Assistant Chief Education Officer-Nursery, Ministry of Education, Ms. Ingrid Trotman, who represented Minister of Education, Ms. Nicolette Henry, at the function, further charged the graduates to “have faith in the world, challenge justice, embrace [their] strengths, admit [their] failings, value all you have been taught and know your self-worth” as they embark on their new, brighter futures”.

In an invited comment, Ms. Candida Tracey, who is the second best graduating student from the WOP Care of the Elderly Programme, said that she was inspired by the First Lady’s advocacy for the elderly to pursue the Care of the Elderly programme. “The [First Lady] is very inspiring… Taking care of the elderly is something that she’s passionate about. It’s something I appreciate about her and she… inspired me to do this course and to give back to Guyana,” she said. 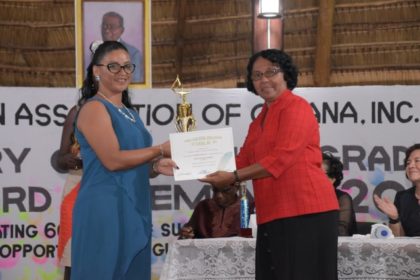 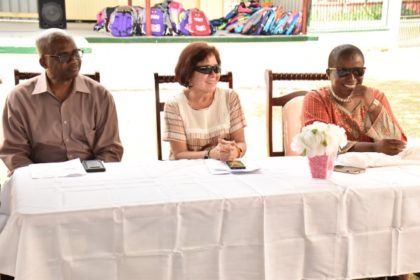 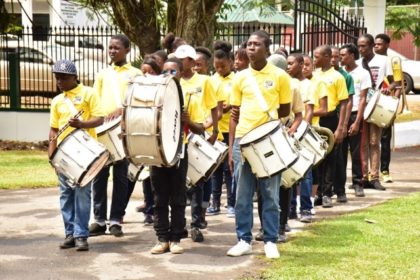 The COFONA Band Corps marching into State House before the commencement of the Literacy Extravaganza. 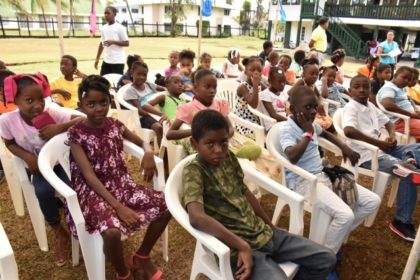 A section of the boys and girls who attended Gordon Family and Friends Annual Literacy Extravaganza, which was held on Saturday on the lawns of State House, New Amsterdam, Berbice.