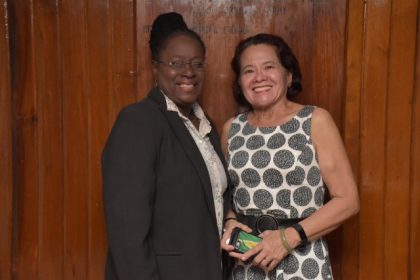 During the meeting, which was held at State House, the First Lady said that she is looking to collaborate with the Regional Administration to implement these projects with the aim of enhancing the lives of citizens of the Region. She explained that her Office has been asked to train more women to be successful in their own business endeavours. “This year of course, we will also have training programmes in child care and care of the elderly with the aim of having those people who are trained, certified by the Board of Industrial Training and we also have our ICT workshops for adolescence and school leavers so those are some of the things that we plan to do this year,” she said.

Expressing her appreciation, Ms. Ferreira Dougall said that , “I am happy that the First Lady did make the call to discuss these things for young people because one of our main focuses in Region Three is to empower young people. Also, the project for the women, I am also happy with that because [it will allow women to] be self-sufficient. We have a lot of mothers who want to be trained but don’t know where to go…having the training will empower them,” she said.

The First Lady said that her Office is currently planning for this year’s projects and noted that she will be supported by the Ministries of Education and Public Telecommunication in the implementation of some of the projects.